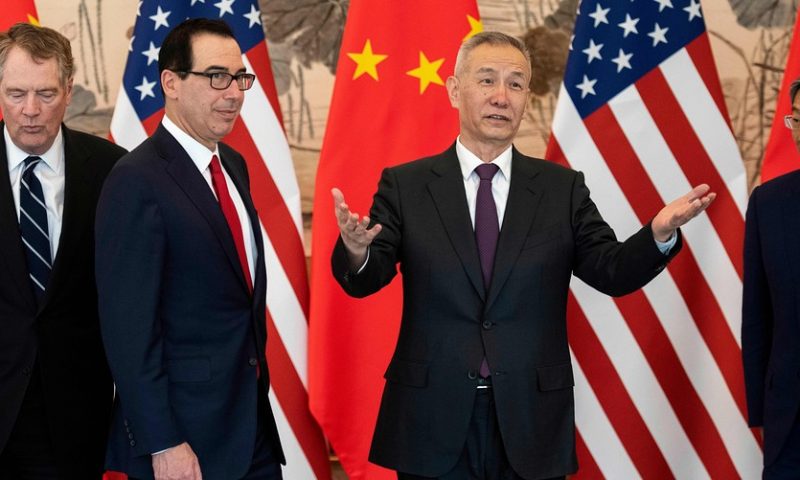 How did the benchmark indexes fare?

Trade tensions that drove volatility for stocks last week were rebooting Monday, as investors confronted the prospect that a U.S.-China tariff deal could take longer than anticipated, if a pact occurs at all. Talks in Washington ended Friday without an agreement.

After raising tariffs on $200 billion worth of annual Chinese imports to 25% from 10% on Friday, the Trump administration said it was ready to impose higher tariffs on another roughly $300 billion of goods, or nearly all the remaining products Americans buy from the second-largest economy.

On Monday, Chinese officials announced retaliatory tariffs against the U.S., hitting $60 billion in annual exports to China with new or expanded duties that could reach 25%. Hu Xijin, editor in chief of China’s Global Times, a daily Chinese tabloid with ties to the Communist Party, reported on Twitter Monday morning that China may take further steps in the coming days and weeks.

In several tweets over the weekend, President Donald Trump argued that the U.S. was in an advantageous position over trade, though White House economic adviser Larry Kudlow admitted Sunday that “both sides” will feel the pain. His comment that Trump and China’s President, Xi Jinping, may meet at the Group of 20 international conference in June failed to soothe investors.

Trump early Monday continued to send tweets regarding the talks, arguing that there was “no reason” for U.S. consumers to pay tariffs and that companies would leave China to avoid the duties if a deal isn’t reached.

Chinese state-ran media over the weekend published several editorials blasting the U.S. position and vowing that Beijing would stand firm in the talks.

In addition to China concerns, investors were also paying attention to a U.S. Supreme Court ruling that said Apple customers can proceed with an antitrust lawsuit challenging the company’s exclusive control over the marketplace for iPhone apps.

Uber Inc. stock was still in the spotlight, after the ride-hailing firm made its debut on the New York Stock Exchange Friday. After pricing at $45 per share, Uber stock closed down 7.6% at 41.57. Shares remain under pressure Monday, down 9.7%.

Videogame publisher Take-Two Interactive Software Inc. TTWO, -3.66% and Tencent Holdings Ltd. TCEHY, -4.33% are both set to report earnings after the close on Monday.

At 11 a.m. Eastern Time, the Federal Reserve will release its survey of consumer expectations.

Fed Vice Chairman Richard Clarida gave a speech Monday morning on the central bank’s ongoing review of its overall monetary policy strategy, saying “we expect to make our conclusions public in the first half of 2020.”

“On the heels of 2019’s historic rally, valuations are no longer depressed, making it harder for equities to shrug off looming macro risks,” he added. “With the ultimate trade outcome inherently uncertain and difficult to model or predict, investors are selling first and asking questions later. More globally exposed, cyclical industries like technology and industrials are proving most vulnerable.”

“Any good will to risk assets on Friday has faded through Asia, and there the preservation of capital is the overriding theme, although there is absolutely no panic,” said Chris Weston, head of research at Pepperstone.

“Protectionism and the impact that can have on demand can be hard to model, and it feels that with these dynamics in play the market will further de-risk, with traders wanting a return of their equity, as opposed to on their equity,” Weston added.

Trade worries weighed on Asian markets, where the Shanghai CompositeSHCOMP, -1.21%  closed down 1.2% and other major indexes logged losses of 1% or more. Europe followed suit with the Stoxx Europe 600 SXXP, -1.21%  down 1.2%.

The dark reason so many millennials are miserable and broke