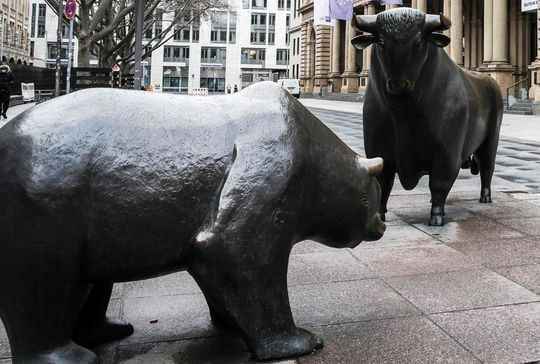 U.S. stocks closed modestly lower Monday, but off the session lows, extending a slump for equities after all three main benchmarks notched their worst week in about three months amid fears of rising inflation.

How did stock benchmarking trade?

On Friday, the Dow, S&P 500 and the Nasdaq Composite Index all logged their steepest weekly losses since Feb. 26, with the Nasdaq also booking its lengthiest weekly losing streak, four straight, since Aug. 23, 2019.

Stocks ended lower to kick off the week as tech heavyweights saw a fresh round of selling.

“We see guys rotating out of recent winners and going into other areas of the S&P 500, which over the past year or two lagged,” Sahak Maneulian, head of equity trading at Wedbush Securities, told MarketWatch. “But with the reopening, reflation trade, some of those sectors are moving higher at the expense of growth names.”

Optimism around an economic recovery in the U.S. and Europe helped to lift oil futures to a more than two-year high of $66.27 a barrel for June West Texas Intermediate crude CLM21, 0.35%.

Inflation fears also weighed on the market and investors were looking toward Wednesday’s release of minutes from the Federal Reserve’s most recent meeting to help gauge the central bank’s tolerance for pricing pressures in the recovery phase of the COVID pandemic.

“We are going to continue to hyperfocus on inflation for the foreseeable future, because it matters: Inflation and inflation expectations impact consumer behavior, and they impact monetary policy. In the current context, inflation may also impact fiscal policy,” wrote Northern Trust Wealth Management CIO Katie Nixon, in a research report on Monday.

A number of Fed members on Monday described those pressures as likely transitory, even after last Wednesday’s read on consumer inflation came in at its hottest rate since 2008.

Atlanta Fed President Raphael Bostic said Monday in a CNBC interview, that he supports continued easy-monetary policy, and that it will take a “couple of months” to understand the inflation dynamics that are under way as the economy is recovering from the pandemic.

Fed Vice Chairman Richard Clarida said it’s too soon to scale back Fed asset purchases and that he expects higher inflation to be temporary, but that he’s also watching economic data closely.

This comes as nearly one-fourth of adults, in a new Fed survey, said they were worse off financially in the wake of the COVID-19 pandemic. Two-thirds of Black and Hispanic adults said they were doing at least “okay,” compared with 80% of white adults and 84% of Asian adults.

Meanwhile, data in the world’s second-largest economy showed some evidence of China’s sluggish pace of recovery from COVID, reported The Wall Street Journal, citing the National Bureau of Statistics.

The readings come after similar reports for retail sales in the U.S. for April came in flat and a report on U.S. manufacturing output rose 0.7% in April, weaker than economists forecast.

Domestically, equity markets have been underpinned by a brightening outlook for the U.S. economy and corporate earnings, with strategists increasing 2021 earnings estimates at the fastest rate since Donald Trump’s 2018 tax-cut plan prompted a reassessment of the outlook for corporate profits, Bloomberg News reports.