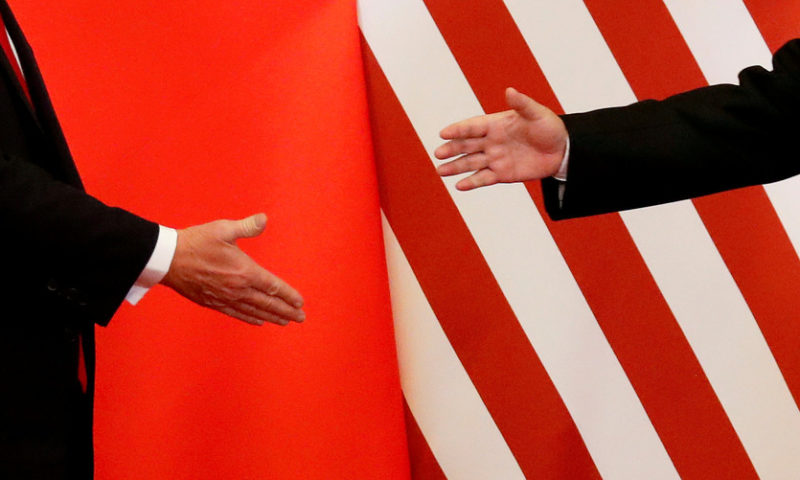 U.S. stock indexes on Tuesday were set to pull back, as remarks from President Donald Trump stoked fresh anxieties about the prospects of a near-term resolution of trade tensions between the U.S. and China.

Trump told The Wall Street Journal, in an interview published late Monday, that it is “highly unlikely” that he would accept Beijing’s request to hold off on increasing tariff rates on Chinese goods from the beginning of January 2019, raising some doubts about prospects for a detente between the world’s two largest economic superpowers when Trump and Chinese President Xi Jinping meet on Friday in Buenos Aires. The pair are set to discuss trade on the sidelines of a meeting of the Group of 20 nations.

Trump said that if talks with his Chinese counterpart don’t go well that he could put tariffs on the rest of Chinese imports that are currently not subject to duties. “If we don’t make a deal, then I’m going to put the $267 billion additional on” at a tariff rate of either 10% or 25%, he told WSJ.

Animosities over trade between the U.S. and China have been among the central concerns for investors recently because an intensification of hostilities could precipitate a slowdown in China and the rest of the world.

Investors are also digesting comments from Federal Reserve No. 2 Richard Clarida, who continued to present a relatively dovish stance in a Monday morning speech to a conference sponsored by The Clearing House in New York, ahead of a Fed policy meeting later this month, when the central bank is widely expected to raise interest rates.

Market participants, however, are eager for more clarity as to the Fed’s plan for interest rate increases in 2019, and on this point, Clarida said incoming data “supports the case for gradual policy normalization” next year, while emphasizing that the federal funds rate much closer to the “neutral level,” at which the Fed will stop raising rates, than it was when it began hiking in 2015. “How close is a matter of judgment, and there is a range of views on the FOMC,” he said.

Apple Inc. shares AAPL, -1.83% were in focus after Trump said during The Wall Street Journal interview that tariffs could also be placed on iPhones and laptop computers imported from China if the U.S. decides to put tariffs on additional goods. Shares of Apple were down 1.5% in premarket trade.

Chip makers are also facing selling pressure during premarket trade, as new or magnified tariffs are expected to hurt sales and raise input costs. Micron Technology, Inc. MU, +0.52% shares are down 1.8% in premarket action, while Advanced Micro Devices Inc. AMD, +0.70% stock has fallen 0.9%, shares of Nvidia Corp. NVDA, -0.74% are down 0.7% and shares of Analog Devices, Inc. ADI, -1.69% have fallen 4.9%.

Microsoft Corp. MSFT, -0.85% stock will be in focus Tuesday, as the firm will begin the trading day with a chance to claim the title of the world’s largest company. The software-and-services firm closed Monday with a market capitalization just $11 billion, or 1.3%, shy of Apple’s, currently the world’s largest firm by market value. Microsoft shares are down 0.1% in premarket trade.

United Technologies Corp. UTX, -5.20% on Monday announced that it planned on breaking its company in to three parts. Shares were down 2% before the opening bell.

Shares of General Motors Co. GM, -0.82% looked set to decline on Tuesday, a day after it closed at a three-month high following the announcement of cost-cutting measures that included layoffs and plant closures. Trump on Monday ripped GM’s plans, telling the Journal he told Barra she should stop making cars in China and replace lost production in Ohio. GM’s stock was down 0.6% in premarket trade.

Tiffany & Co. TIF, -0.85% stock is down 0.5% before the opening bell, ahead of the jewelry merchant’s third-quarter earnings report to be released before the market open Wednesday. The stock has been under pressure in recent weeks as a supply glut for low-end diamonds has forced prices to fall.

Shares of Bristol-Myers Squibb Co. BMY, -4.91% are down 3.6% before the bell, after the company reported the failure of a study of a prospective skin-cancer drug Tuesday evening.

“As for Apple, and the impact from possible tariffs which helped push the shares lower in post market trading, any negative effects are likely to be overstated given that the firm was able to absorb the impact of lifting the ceiling price on its most expensive iPhone model by much more than that with its recent upgrades,” wrote Michael Hewson, chief market strategist at CMC Markets UK, in a note.

What data and other Fed speakers are ahead?

Case-Shiller house prices for September are due at 9 a.m., and a reading of consumer confidence is set for 10 a.m.