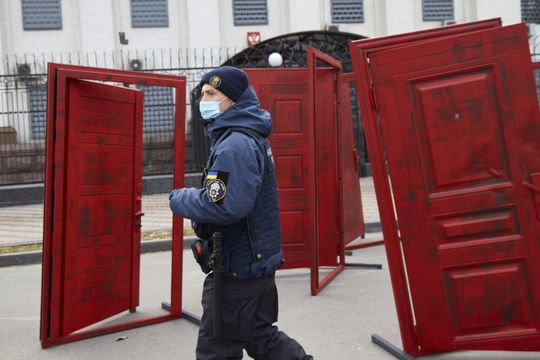 U.S. stock-index futures were headed sharply lower Monday evening as Russian President Vladimir Putin ordered the deployment of troops to separatist areas within Ukraine, after recognizing their independence, a move that some fear puts Ukraine and Russia one step closer to military conflict.

Markets in the U.S. were closed in observance of Presidents Day and trade on Tuesday will provide the first opportunity for investors to react to developments in Eastern Europe.

How are stock-index futures performing?

Markets were set for big losses on Tuesday as Putin ordered forces Monday to “maintain peace” in separatist regions of eastern Ukraine. The announcement raised fears, which have kept investors skittish, that an invasion was about to materialize.

The White House said President Joe Biden will issue an executive order that “will prohibit new investment, trade, and financing by U.S. persons’’ in those areas.

Meanwhile, officials from the European Union referred to Putin’s latest moves, including the recognition of the independence of the Russian separatist Donetsk and Luhansk regions’ independence, as “a blatant violation of international law.”

Read: What a Russian invasion of Ukraine would mean for markets as Putin orders troops to separatist regions

Markets have been unsettled at least partly due to concerns of a Russian annexation of Ukraine, which could lead to greater global tensions. Crude-oil futures and those for natural gas NG00, 6.64% have been mostly buoyed by invasion fears, though gains last week were muted for West Texas Intermediate crude CL.1, +3.06% CL00, 3.49% traded on the New York Mercantile Exchange, the U.S. benchmark contract.