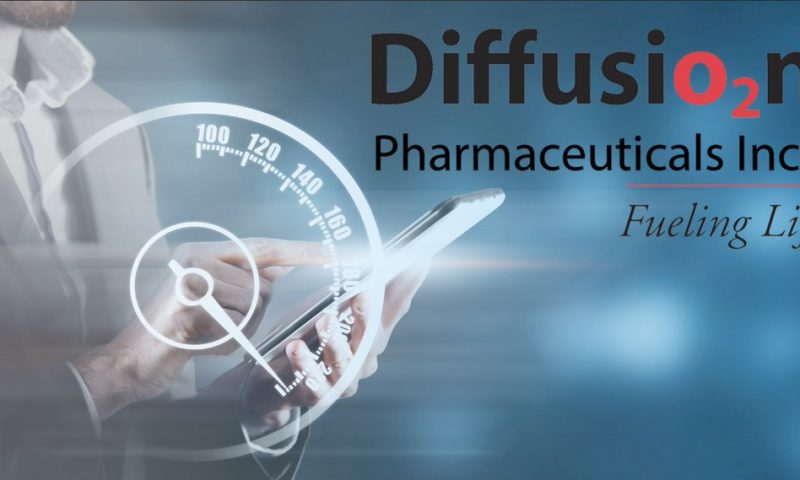 CHARLOTTESVILLE, Va.– Diffusion Pharmaceuticals Inc. (Nasdaq: DFFN) (“Diffusion” or “the Company”), a cutting-edge biotechnology company developing new treatments for life-threatening medical conditions by improving the body’s ability to deliver oxygen to the areas where it is needed most, today announced the closing of its previously announced registered direct offering, priced at-the-market under Nasdaq rules, with certain institutional and accredited investors of 11,428,572 shares of the Company’s common stock, at a purchase price of $1.05 per share. The gross proceeds to Diffusion, before deducting placement agent fees and other offering expenses, were approximately $12.0 million.

H.C. Wainwright & Co. acted as the exclusive placement agent for the offering.

Diffusion currently intends to use the net proceeds from the offering to fund research and development of its lead product candidate, TSC, including clinical trial activities, and for general corporate purposes.

Diffusion Pharmaceuticals Inc. is an innovative biotechnology company developing new treatments that improve the body’s ability to deliver oxygen to the areas where it is needed most, offering new hope for the treatment of life-threatening medical conditions. Diffusion’s lead drug trans sodium crocetinate (TSC) was originally developed in conjunction with the Office of Naval Research, which was seeking a way to treat multiple organ failure and its resulting mortality caused by the systemic hypoxemia from blood loss on the battlefield. Evolutions in research have led to Diffusion’s focus today: Fueling Life by taking on some of medicine’s most intractable and difficult-to-treat diseases, including multiple organ failure, stroke and glioblastoma multiforme (GBM) brain cancer. In each of these diseases, hypoxia – oxygen deprivation of essential tissue in the body – has proved to be a significant obstacle for medical providers and is the target for TSC’s novel mechanism.

In July 2019 the Company reported favorable safety data in a 19-patient dose-escalation run-in study to its Phase 3 INTACT program, using TSC to target inoperable GBM. Further findings from the dose-escalation run-in study, released in December 2019, also showed possible signals of enhanced survival and patient performance. Diffusion’s in-ambulance PHAST-TSC trial for acute stroke began enrolling patients last year. Given the heightened responsibilities of the Company’s emergency medical services providers, enrollment in this trial is expected to be minimal until the COVID-19 pandemic abates. The Company is also currently partnering with the University of Virginia and iTHRIV in a research program to develop its novel small molecule TSC as a treatment for Acute Respiratory Distress Syndrome (ARDS) from COVID-19, specifically targeting the associated multiple organ failure.

Preclinical data supports the potential for TSC as a treatment for other conditions where hypoxia plays a major role, such as myocardial infarction, peripheral artery disease, and neurodegenerative conditions such as Alzheimer’s and Parkinson’s disease. In addition, RES-529, the Company’s PI3K/AKT/mTOR pathway inhibitor that dissociates the mTORC1 and mTORC2 complexes, is in preclinical testing for GBM.

Diffusion is headquartered in Charlottesville, Virginia – a hub of advancement in the life science and biopharmaceutical industries – and is led by CEO David Kalergis, a 30-year industry veteran and company co-founder.

To the extent any statements made in this news release deal with information that is not historical, these are forward-looking statements under the Private Securities Litigation Reform Act of 1995. Such statements include, but are not limited to, statements regarding the use of proceeds, as well as statements about the company’s plans, objectives, expectations and intentions with respect to future operations and products, the potential of the company’s technology and product candidates, and other statements that are not historical in nature, particularly those that utilize terminology such as “would,” “will,” “plans,” “possibility,” “potential,” “future,” “expects,” “anticipates,” “believes,” “intends,” “continue,” “expects,” other words of similar meaning, derivations of such words and the use of future dates. Forward-looking statements by their nature address matters that are, to different degrees, uncertain. Uncertainties and risks may cause the Diffusion’s actual results to be materially different than those expressed in or implied by such forward-looking statements. Particular uncertainties and risks include: the uncertainty as to whether Diffusion’s pre-IND submission will be ultimately acceptable to the FDA for an IND submission or that the FDA will not require significant changes that might take significant time to implement, if at all, or that any such required changes will be financially feasible; moreover, if the protocol in Diffusion’s pre-IND submission or a revised protocol is acceptable to the FDA for an IND submission, there can be no assurance as to when the FDA might provide such guidance or when the program might be able to commence, if at all; the uncertainty that as of yet the FDA has no approved a trial evaluating TSC for the treatment of ARDS, or if approved, such a trial possibly entailing significant additional time, effort and expense, particularly in light of the difficulty of doing business during the COVID-19 pandemic; Diffusion’s ability to maintain its Nasdaq listing, the use of proceeds of the offering, market and other conditions, the difficulty of developing pharmaceutical products, obtaining regulatory and other approvals and achieving market acceptance; general business and economic conditions; the sufficiency of the company’s cash, the company’s need for and ability to obtain additional financing or partnering arrangements; and the various risk factors (many of which are beyond Diffusion’s control) as described under the heading “Risk Factors” in Diffusion’s filings with the United States Securities and Exchange Commission. All forward-looking statements in this news release speak only as of the date of this news release and are based on management’s current beliefs and expectations. Diffusion undertakes no obligation to update or revise any forward-looking statement, whether as a result of new information, future events or otherwise, except as required by law.