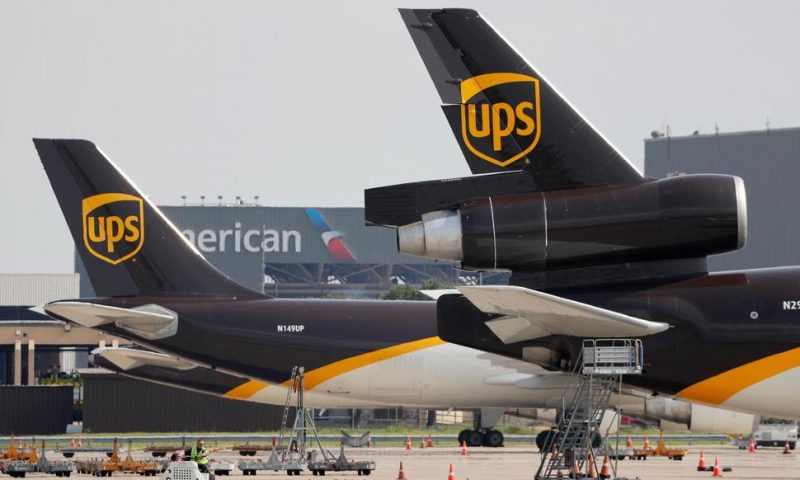 DALLAS — UPS is doing booming business in next-day deliveries in the United States while keeping costs under control, but the weakening global economy is contributing to disappointing revenue growth.

The delivery giant said Tuesday that its third-quarter profit rose 16% to $1.75 billion. Revenue, however, fell short of Wall Street expectations.

UPS also announced that Chief Operating Officer Jim Barber will retire at the end of the year, the second departure of a senior executive in three months. The 59-year-old Barber was considered a likely successor to CEO David Abney.

UPS is taking advantage of increasingly demanding consumers. In the third quarter, its volume of next-day deliveries in the U.S. jumped 24% and two-day service surged 17% compared with a year ago.

“There has just been a structural change when it comes to air shipments, and big e-tailers and retailers and others are wanting to get packages to customers within 24 hours,” Abney said in an interview. The CEO noted that UPS has added nine planes this year with two more on the way to handle the growth in quick shipments.

Rival FedEx recently ended its U.S. air shipments for Amazon.com. UPS did not break out the benefit it might have gained. Abney instead pointed to UPS’ strategy of pursuing business with small and medium-size retailers and other businesses.

The delivery companies are heading into the most important part of the year for them, the Christmas-shopping season that starts in earnest around Thanksgiving Day. Atlanta-based UPS said it expects to handle about 32 million packages a day during the holiday peak, 50% more than an average day the rest of the year. The company plans to hire 100,000 seasonal workers to help sort and deliver the load.

UPS expects that air shipments will continue to grow during the holiday crush “as next-day delivery increasingly becomes the new standard” for retail shipments to consumers, Barber said during a call with analysts.

UPS reported third-quarter earnings excluding some one-time costs, mostly employee benefits related to restructuring, were $2.07 per share. That was a penny better than expected, according to surveys by Zacks Investment Research and FactSet.

Revenue rose 5% to $18.32 billion, slightly below expectations in the FactSet survey. Revenue from package deliveries in the U.S. rose nearly 10% but just 0.5% internationally.

Costs grew 3% despite a 6% increase in employee pay and benefits. Executives cited automation in new facilities for driving down the average cost per package by more than 2% while adding capacity to handle another 400,000 packages an hour.

The company stuck to its full-year forecast of profit between $7.45 and $7.75 per share.

The announcement of Barber’s retirement seemed to catch Wall Street by surprise. Barber is a 35-year UPS veteran who was named chief operating officer only last year, prompting speculation that he was the heir apparent to the 64-year-old Abney. In August, Richard Peretz, 57, was replaced as chief financial officer and also plans to retire at the end of this year.

Abney said Barber “did a lot of good stuff for us,” but it was his decision to retire. As for when he will retire, the CEO said, “I’m having so much fun now I’m not even thinking about those things.”

Citi analyst Christian Wetherbee said Barber was “well liked by the investment community and viewed as the next CEO.” He wrote in a note to clients that “the removal of an executive seen as an operational catalyst,” along with weaker core earnings before interest and taxes, could put downward pressure on UPS stock Tuesday.

US Endorses Tobacco Pouches as Less Risky Than Cigarettes