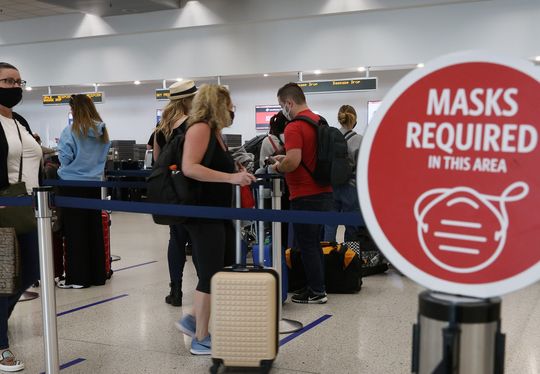 Delta is not only starting to nibble at the U.S. economy, it also threatens to prolong the biggest surge inflation in more than a decade.

The new and highly contagious variant of the coronaviris didn’t hurt the U.S. early in the summer, but now evidence is emerging of fresh strains on the economy.

Consumer hopes about an end to the pandemic are fading, airline and restaurant reservations have softened and businesses are putting off a return to the office. Those are just a few of the many signs of an economy fraying at the edges.

“It’s hard to believe that we’re at it again, but Covid is back in full force and once again threatens to derail economic activity,” said chief economist Aneta Markowska of Jefferies LLC.

It’s still too early to determine how much momentum delta will rob from the U.S. recovery. Markowski and most Wall Street economists doubt the damage will be severe. Yet it’s safe to say the damage will rise as long as cases keep increasing.

That’s not all. Delta could exacerbate widespread shortages in the U.S. and abroad for materials and even labor that have contributed to a huge uptick in inflation.

Here’s the problem: Companies simply can’t get enough supplies to produce all the goods that customers want to buy. Nor can they find enough workers to get fully staffed up despite still-high unemployment.

The result: the biggest burst in inflation since at least 2008, and by several other measures, perhaps a few decades.

These constraints were expected to ease as the pandemic faded, but delta has added new ruffles.

Start with major trading partners such as China that produce an array of goods vital to the smooth running of the U.S. economy.

China just shut down the world’s third busiest port after a coronavirus outbreak, raising the possibility that supplies or products desperately needed by U.S. businesses might not get here soon. In a worst-case scenario, Best Buy BBY, +1.39%, Amazon AMZN, +0.15% and other retailers might not be able to stock up on popular consumer goods ahead of the holiday shopping season.

Prices have also risen rapidly for many domestically produced goods including basic staples such as groceries. The cost of food is rising at the fastest pace in a decade and is likely to keep going up for a while.

How come? the prices farmers are receiving for their crops is running at the highest level in some 30 years. Food producers are trying to pass those costs onto customers.

Farmers aren’t the only ones fetching higher prices. Both small and large companies alike say they are trying to raise prices and in most cases the increases have stuck. Wholesale inflation surged again in July and showed plenty of price pressures in the guts of the U.S. economy.

If that’s not enough, rents are likely to start increasing again soon, especially if a Covid-related moratorium on evictions ends soon by either court order or the expiration of a government rule.

Prices have been kept in check by the moratorium even as the number of units available for rent nationwide dropped to a nearly 40-year low. Housing is the single biggest cost for millions of Americans.

Then there’s a surprising labor shortage. Finding good help wasn’t a problem many companies expected to have, but they do.

There are still some 6 million people missing from the labor force who were working before the pandemic. The labor shortage has forced some companies to scale back production and many others to raise wages. In both cases it’s adding to price pressures.

Delta could further delay the plans of many people to return to work, particularly if some schools resort again to remote learning.

It’s all added up. The increase in the cost of living rose at a frothy 5.4% in the 12 months ended in July to mark the biggest increase since 2008. By some estimates the rate of inflation could climb to as high as 6% or even 7% by early next year before it begins to taper off.

Inflation is bound to recede, virtually every economist agrees. The big debate is over how fast it declines and to what level.

The Federal Reserve has predicted since the start of the pandemic that inflation would eventuall return to precrisis levels of 2% or less.

Yet the longer it remains elevated, some Fed critics contend, the more likely inflation will become embedded in the attitudes of consumers and businesses and stay above the Fed’s target.

It would erode the standard of living for most workers whose wages typically rise less than 3% a year and complicate the Fed’s job of keeping the U.S. economy on an even keel.