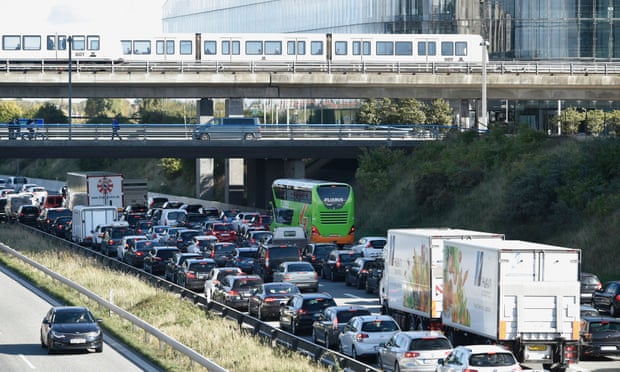 Zeland cut off as Swedish-registered car sought in connection with kidnapping, according to reports

The Oresund bridge linking Denmark and Sweden, the setting of the Nordic noir series The Bridge, and the Great Belt bridge between the islands of Zeland and Funen later reopened as hundreds of Danish police and soldiers used cars, sniffer dogs and helicopters to hunt for a black Swedish-registered rental car.

The driver and two passengers in the V90 car, hired from a Hertz agency in Stockholm, were wanted in connection with “a serious crime”, Danish police said in a statement, adding that anyone who saw the vehicle should “on no account try to make contact with the occupants, but notify the police immediately”.

The eastern island of Zeland, where Copenhagen is located, was cut off for about two hours, causing long tailbacks and leaving thousands of travellers stranded around Copenhagen.

Copenhagen’s airport remained open but train traffic to and from the city’s central station was temporarily suspended, while ferry services were slowly recovering and some trains linking western Denmark to Copenhagen skipped some stops to catch up.

The state broadcaster DR said the crime was believed to be a kidnapping, adding that the manhunt had been extended nationwide. The Danish army confirmed it was involved in the search but referred all questions to the police.

“I spent 41 years in the Danish police, I have never seen such a big action taken before,” Hans Jorgen Bonnichsen, former head of operations at the Danish security and intelligence service, told local media.

Italy’s budget drama – all you need to know