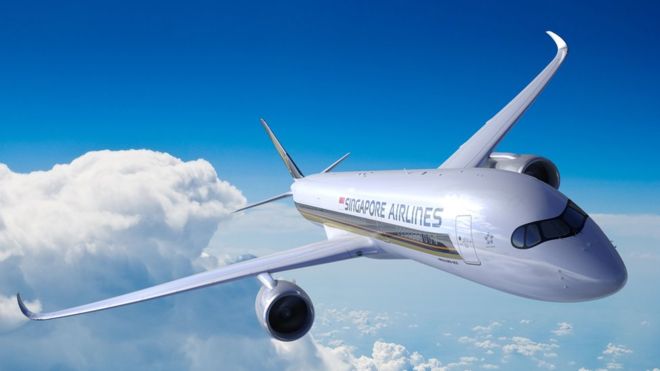 The battle to offer the world’s longest non-stop flight steps up a gear on Thursday, when a new Singapore-to-New York service takes off.

Singapore Airlines is relaunching the service five years after they withdrew it because it had become too expensive.

It will cover more than 15,000km and is scheduled to take just under 19 hours.

Qantas launched a 17-hour non-stop service from Perth to London earlier this year, while Qatar runs a 17.5-hour service between Auckland and Doha.

Have passengers been snapping up the tickets?

The flight from Changi Airport to Newark’s international airport in New Jersey will be taking off amid much fanfare and with barely a seat to spare.

Singapore Airlines (SIA) said there was demand for customers for non-stop services which help cut travelling times compared with flights which have a stopover.

The airline told the BBC that business class seats for the flight were fully booked.

However, there were “a very limited number” of premium economy seats left.

The airline is not planning to offer any economy bookings on the route.

A business class ticket will entitle passengers to two meals, and the choice of when they are served, plus refreshments in between. They will also have a bed to sleep in.

Premium economy fares will get three meals at fixed times, with refreshments in between.

Do people want to fly for 19 hours?

The brand new Airbus plane that SIA is using has been configured to seat 161 passengers in all – 67 business passengers and 94 premium economy passengers.

“The thinking behind that is that they are selling a premium product – it’s for the top end of town,” says aviation expert Geoffrey Thomas, who will be on board Thursday’s flight.

“This is a route between two massive financial hubs, and so they will fill this plane up with business people, or well-heeled travellers who want the convenience of a non stop flight.

“It’s also been proven that when carriers introduce a new non-stop route, the traffic on that route increases threefold.”

Mr Thomas, the editor-in-chief of airline rating site Airlineratings.com, has been on several such inaugural flights, including Qantas’ new long-haul from Perth to London, inaugurated earlier this year, and he says he is looking forward to being a part of history.

“The Qantas flight to London was a huge event. We were basically on our feet for the entire flight, it was incredibly exciting. There’s almost a party atmosphere on board.”

Which route will the flight take?

Of two possible routes that SIA could take on Thursday to Newark, SIA has already told its passengers which one it will take – the NOPAC route, or the North Pacific route.

Mr Thomas says it will cover a distance of some 15,341km, but reminds non-aviation experts that while the distance between destinations remains constant, the distance flown and flight times can vary because of tailwinds, headwinds and any need for weather-related diversions.

“When you’ve got some good strong jet streams going in an easterly direction, which is the way we’ll go, then we will fly over Japan, then over the North Pacific, possibly touching into Alaska, then down through Canada into Newark.”

At the moment, SIA is estimating the flight will take around 18 hours and 25 minutes.

Is this the future of long-haul travel?

The A350-900 ULR (ultra-long-range) that will fly on Thursday from Singapore to Newark belongs to Airbus’ family of long-range, twin-engine aircraft.

The planes have been designed to replace Boeing’s older 777 series and use between 20% and 30% less fuel than the 777s did – which is a good thing amid rising oil prices.

Singapore Airlines launched the same non-stop route between Changi and Newark in 2004, but by 2013 the carrier was forced to cancel it. The A340-500 it was using at the time used a lot of fuel and eventually the route became too expensive to run.

Several carriers already use the newer A350-900s on their long-haul routes. They have higher ceilings, larger windows and lighting designed to reduce jetlag – all good things for busy business travellers.

But the ultra-long-range version that SIA has bought from Airbus has the longest capability of any aircraft flying today, thanks in part to a slightly modified fuel system.

It can fly for 20 hours non-stop, which most aviation experts will tell you is the future of very long-haul travel for business and pleasure.

Mr Thomas says it’s been proven over and over again that people want to fly non-stop, “so these sorts of aeroplanes are set to gain terrific momentum”.

“Qantas’ flight from Perth to London is seeing a load factor in economy of 92% – and in premium it’s 94%. So from an airline perspective, these routes are money-making.

“We really are entering a new era of travel.”