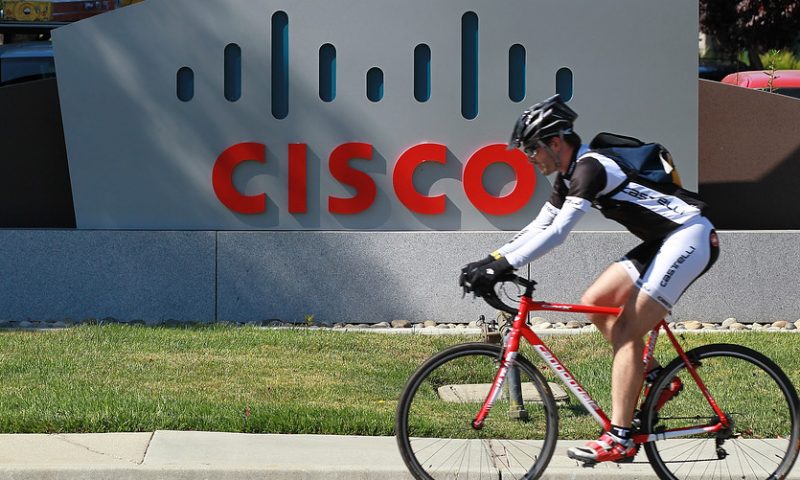 Cisco Systems Inc.’s stock rose in the extended session Wednesday after the networking company reported quarterly results that topped Wall Street estimates and a revenue forecast for the end of its fiscal year that exceeded analysts’ consensus amid higher tariffs in the escalating trade war with China.

Cisco CSCO, +0.81% shares rose 3% after hours. For the fourth quarter, Cisco expects adjusted earnings of 80 cents to 82 cents a share on 4.5% to 6.5% year-over-year revenue growth, or $13.21 billion to $13.46 billion. Cisco said the forecast excludes the company’s now-divested Service Provider Video Software Solutions business, which brought in $206 million in the fourth quarter in 2018. Analysts had estimated earnings of 81 cents a share on revenue of $13.29 billion.

On the earnings conference call, Cisco Chairman and Chief Executive Chuck Robbins said that the hike of tariffs to 25% from 10% has already been “baked” into the outlook. This week China said it was imposing tariffs of up to 25% on U.S. goods, citing the 25% tariffs that President Donald Trump imposed on $200 billion in Chinese goods.

Robbins said Cisco has been in contact with the Trump administration to make sure it understands the impact of the tariffs, that it has continued to optimize its supply chain, and will make pricing adjustments when needed.

“Last week, when we saw the indication that the tariffs were going to move to 25% on Friday morning, the teams kicked in and we actually have executed completely on everything that we need to do to deal with the tariffs,” Robbins told analysts on the call.

Cisco said it returned $7.5 billion to shareholders through share buybacks and dividends in the third quarter: $1.5 billion though dividends and $6 billion in the buyback of about 116 million shares at an average price of $52.14 a share. Cisco said it still has $18 billion in buyback authority remaining.

Gold settles with a modest gain, remains pinned below $1,300