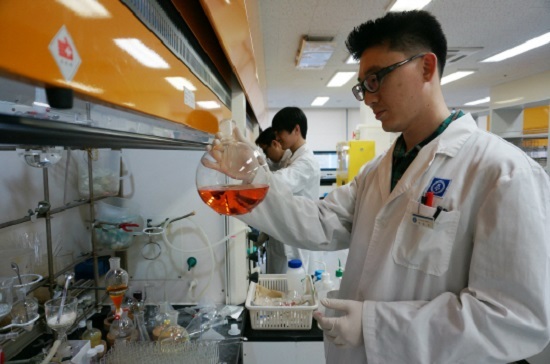 ChongKunDang Pharmaceutical will post record earnings in the fourth quarter and join the1 trillion won (US$891.19 million) league,” said Cape Investment and Securities on Nov. 30 maintaining a “buy” recommendation. The securities firm, however, lowered the target price to 150,000 won from 180,000 won reflecting discount on top pharmaceutical companies’ profit targets.

Its revenue in the period will rise 8.5 percent on-year to 264.5 billion won and operating profit by 6.6 percent to 22.7 billion won. Its new product Esoduo, a reflux esophagitis treatment, has garnered revenue of 3.5 billion won and sales will grow sharply next year to 18 billion won. It is an incrementally modified drug with shortened time for action, and will become its second blockbuster IMD after high blood pressure therapy Telminuvo, said analyst Kim Hyeong-su.

Meanwhile its new drug development is going smoothly. ChongKunDang’s autoimmune disease treatment candidate CKD-506 is entering phase 2a clinical trials in five European counties. Its anti-cancer novel treatment CKD-702 has completed trials in the US and will begin domestic studies from the first quarter next year, the analyst noted.

Corporate Bonds Are Not Leading The Way For Equities