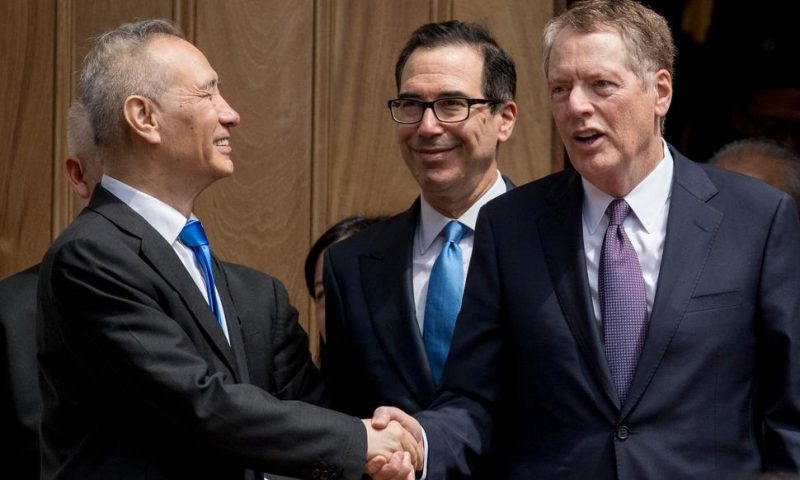 Chinese Vice Premier Liu He says trade talks with the U.S. have not broken down.

BEIJING — CHINA’S leading envoy to trade talks in Washington says the failure to strike a deal in the tariffs war with the U.S. was “just a small setback” and negotiations will continue despite increases in import duties on American imports from China.

In comments to reporters before he left Washington for Beijing on Friday, Vice Premier Liu He said he was cautiously optimistic but that a deal would require the Trump administration to agree to end the punitive tariffs it has imposed on billions of dollars’ worth of Chinese goods.

In comments carried by China’s state-run CCTV, Liu said the remaining differences are crucial ones having to do with principles, “and we will make no concessions on matters of principle.”

Still, he said he did not believe the negotiations had broken down.

“On the contrary, I think it is just a small setback in the talks between two countries, which is inevitable,” Hong Kong’s Phoenix TV showed him as saying.

Liu said it was “China’s opinion that the tariffs are the starting point of the trade friction and must be totally lifted if a deal is reached.”

The Trump administration raised tariffs on billions of dollars of Chinese goods to 25% from 10% on Friday. U.S. Trade Representative Robert Lighthizer said the U.S. was preparing to expand those tariffs to cover $300 billion of Chinese products that aren’t already facing import taxes, or virtually everything imported from China.

Liu also said the two sides were disagreeing over the amount of goods China would pledge to purchase from the U.S. to help reduce the American trade deficit.

“We think this is a very serious issue and we cannot easily change our minds,” he said.

Liu sought to downplay the scale and impact of the dispute, saying that China was a strong nation and would surmount any problems caused by the conflict.

“We just had differences on the wording in certain documents and we hoped to solve the differences,” he said. “Therefore, we think it unnecessary to make an overreaction to it.”