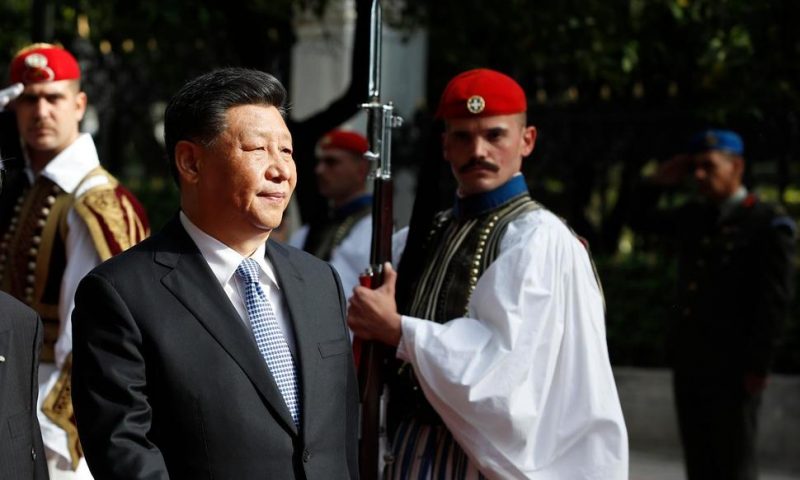 China and Greece have signed 16 bilateral agreements outlining cooperation in a broad range of sectors during a visit by Chinese President Xi Jinping aimed at furthering a major global investment initiative inside the European Union.

ATHENS, Greece — China and Greece signed 16 bilateral agreements on Monday outlining cooperation in a broad range of sectors during a visit by Chinese President Xi Jinping aimed at furthering a major global investment initiative inside the European Union.

China’s state-owned shipping giant Cosco controls Greece’s largest port of Piraeus, near Athens, and Beijing is keen to boost Chinese investment in Greece as part of its global “Belt and Road” investment initiative.

“Both sides see China and Greece as natural partners for building the Belt and Road,” Xi said after meeting with Prime Minister Kyriakos Mitsotakis. “We would like to mesh the Belt and Road initiative more closely with the development strategy of this country.”

Xi said both countries would “fully leverage” Piraeus’ shipment capabilities and strengthen the China-Europe Land-Sea Express Line, a trade route between China and Europe that on land connects Piraeus with Budapest in Hungary.

The prime minister said Greece recognizes China “not only as a great power but as a country that with difficulty has gained a leading geostrategic, economic, and political role.”

Xi also met with President Prokopis Pavlopoulos before he and Mitsotakis visited the Cosco facility in Piraeus.

Greece is still struggling to rebound from a deep and protracted financial crisis that saw its economy shrink by 25 percent. The country and its new conservative government are keen to attract overseas investment despite concerns from some of Athens’ Western allies over the rapid expansion of China’s global influence.

The 16 government and business agreements signed between the two countries Monday include sectors as diverse as extradition, agricultural exports, education, energy, the airline industry and additional Cosco investments in Piraeus.

“It is a road we are opening, that will soon become a highway,” Mitsotakis said.

The Greek prime minister traveled to Shanghai last week to meet Xi at the 2019 China International Import Expo and will be visiting China again next spring.

Thousands of Chinese investors have snapped up apartments around Athens and other Greek cities under a so-called “golden visa” scheme that offers a five-year residence permit to buyers who spend more than 250,000 euros ($275,750) on the local property market. The increased interest from Chinese investors combined with a burgeoning Airbnb market have led to a spike in rents in many parts of the Greek capital and other cities.

UK Avoids Recession but Economy Growing at Near Decade Lows