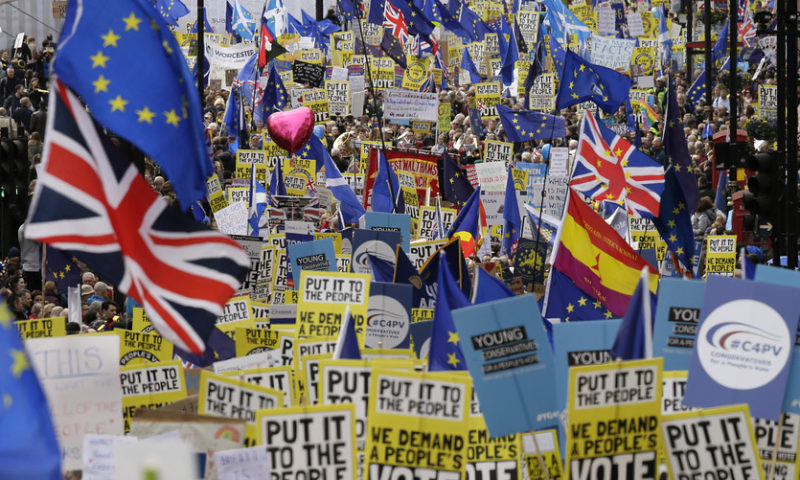 A petition on British Parliament’s website to stop Brexit and remain in the European Union topped 4,400,000 signatures on Saturday, one of the fastest-growing on record with traffic bringing down the site at least twice.

“The government repeatedly claims exiting the EU is ‘the will of the people,’” the petition reads. “We need to put a stop to this claim by proving the strength of public support now, for remaining in the EU. A People’s Vote may not happen — so vote now.”

The call for Prime Minister Theresa May to revoke Article 50 is now one of the most popular petitions ever on Parliament’s site, surpassing 2016’s petition calling for a second referendum on Brexit and crashing the site early Thursday morning as traffic spiked. In order for Parliament to take it up for debate, a petition has to collect more than 100,000 signatures.

“Between 80,000 and 100,000 people have been simultaneously viewing the petition to revoke article 50,” the Parliament’s petition committee said on Twitter. “Nearly 2,000 signatures are being completed every minute. The rate of signing is the highest the site has ever had to deal with and we have had to make some changes to ensure the site remains stable and open for signatures and new petitions.”

The question of whether the government petition had become overpowered by bots began surfacing online. The petition’s email registration process would likely prevent that from happening, cyber-security experts told BBC News.

As the number of signatures continued to grow, the petition’s creator, Margaret Georgiadou, said Saturday she had received death threats over the phone and announced she was closing her Facebook account.

The petition milestone comes just days before March 29, when Britain was originally scheduled to split from the European Union, and as over 1 million anti-Brexit demonstrators flooded the streets of London, calling for a new referendum on whether to leave the EU.

London Mayor Sadiq Khan tweeted a video of himself joining the demonstrators on Saturday, writing, “Enough is enough” and “No matter how you voted, I’m sure you’ll agree — Brexit is a complete and utter mess.”

Vince Cable, a leader of the Liberal Democrat party, also tweeted from the front lines of the march, describing a “huge turnout of people here from all walks of life, of all ages and from all over the country.”

May has signaled to members of Parliament that a third vote on her Brexit withdrawal plan might not happen next week if she can’t find support. If it doesn’t pass, April 12 would be the next deadline for the U.K. to “indicate a path forward.” Her previous two plans were both rejected by Parliament.

Norway airlifts by helicopter over 1,300 passengers from cruise ship