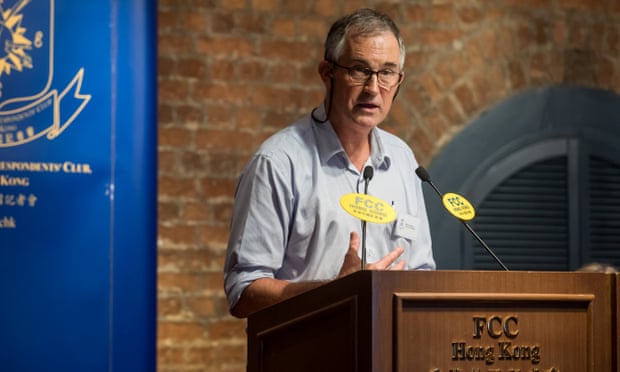 The British foreign secretary, Jeremy Hunt, has said the banning by Hong Kong of a senior UK journalist appears to be politically motivated.

The Chinese territory last week refused to renew the work visa of Victor Mallet, the Asian news editor of the Financial Times who also serves as the vice-president of the city’s Foreign Correspondents’ Club (FCC).

It came two months after government officials in China and Hong Kong condemned the FCC for hosting a speech by an independence activist, Andy Chan, reigniting debate about the viability of the city’s promised freedoms. Mallet chaired the event.

“In the absence of an explanation from the authorities we can only conclude that this move is politically motivated,” Hunt said. “I urge the Hong Kong authorities to reconsider this decision – confidence in Hong Kong’s rights and freedoms is an essential component of its future success.”

Mallet was travelling away from Hong Kong when his work visa renewal was refused. He was allowed back into the city on Sunday but only on a seven-day tourist visa, rather than the six-month visa usually given to British nationals.

The Financial Times said in an editorial that the incident “sends a chilling message to everyone in Hong Kong, highlighting Beijing’s tightening grip on the territory and the steady erosion of basic rights that are guaranteed in Hong Kong’s laws and international agreements”.

Hong Kong, a former British colony, returned to Chinese rule in 1997 under a “one country, two systems” principle with the guarantee of a high degree of autonomy and freedoms, including freedom of the press, not enjoyed elsewhere in China.

But calls for outright independence are a red line for China’s Communist party leaders who deem the global financial hub to be an inalienable part of the nation.

China’s foreign ministry defended Hong Kong’s decision to refuse Mallet’s visa. “Since the return of Hong Kong … everyone can see that Hong Kong’s society and economy has achieved progress,” spokesman Lu Kang said. Hong Kong’s right to protect its legitimate interests was “beyond criticism”, he said.