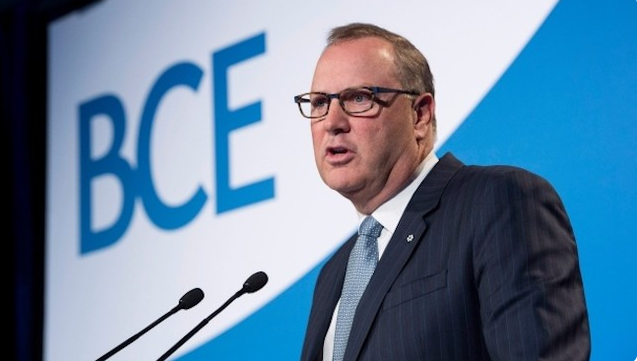 The announcement Friday that George Cope will retire in January after nearly 12 years as chief executive of BCE Inc. has focused fresh attention on the sprawling telecom and media giant as the industry undergoes fundamental changes.

The Montreal-based company, which owns Bell Canada, CTV Inc., and a portion of Maple Leaf Sports and Entertainment Ltd., said chief operating officer Mirko Bibic will take over from Cope on Jan. 5, 2020.

The COO position had been vacant since Cope held it prior to replacing Michael Sabia as CEO in 2008.

“Even though we knew the retirement was coming when Mr. Bibic was promoted to the COO role in October 2018, it does feel a little earlier than expected,” Scotiabank telecom analyst Jeff Fan wrote in a note to clients.

“The market will likely speculate on Mr. Cope’s rationale. Our understanding is this was not health related and Mr. Cope believes this is the right time,” Fan wrote.

“We cannot help but wonder whether his decision was also driven by the state of the industry that is arguably at an important transition point, something we have been highlighting in our research over the past year.”

Among other things, through flagship subsidiary Bell Canada and regional affiliates including Bell Aliant and MTS Bell, BCE has been spending billions on fifth-generation wireless networks and fibre optics wireline networks

Cope, 57, joined Bell in January 2006 as COO after heading the Telus wireless business. Under his leadership, Bell grew its wireless business and executed strategic investments and acquisitions valued at more than $15 billion.

He said in a statement that the time is right for Bibic, 51, to take the company to “the next level.”

As chief operating officer, Bibic has been responsible since October for Bell Mobility, Bell Business Markets, and Bell Residential and Small Business.

BCE chairman Gordon Nixon said in a statement that Cope has re-energized Bell as an “agile” competitor.

“He has led the restructuring initiatives and made the critical investments in Bell’s team, networks and customer service infrastructure required to build a bold competitor across every segment of communications.”

Tim Casey, a telecom analyst with BMO Capital Markets, agreed in a research note that Cope “has been an extremely successful CEO by any measure, particularly in creating shareholder value.”

“We do not expect any changes to strategy or capital markets policy as the company transitions into new leadership,” he added. “That said, we expect investors will have some concerns over the medium-term outlook for the company given the success of Mr. Cope’s track record.”

RBC Dominion Securities analyst Drew McReynolds wrote BCE’s competitive position in the modern telecom era “has never been stronger” than under Cope but he expressed confidence in his successor.

“Given Mr. Bibic’s extensive background and experience along with a converging Canadian telecom industry that through the medium-term is likely to play into BCE’s strengths, the risk and uncertainty around such a transition in our view is low.”