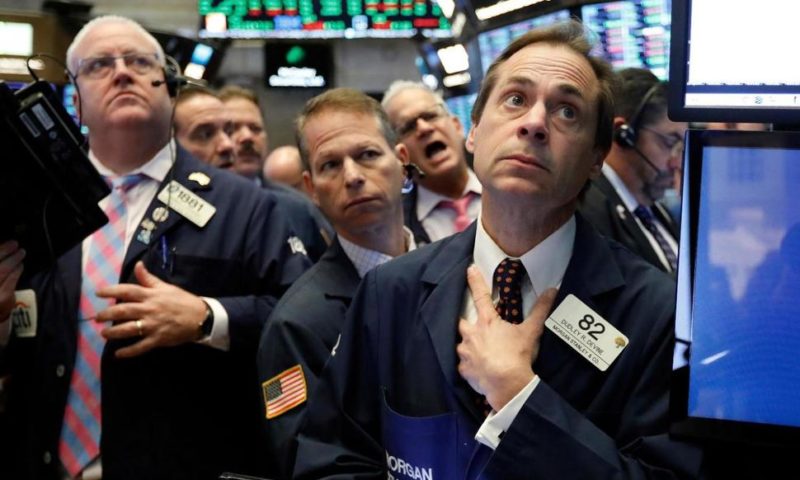 A turbulent day of trading on Wall Street ended Wednesday with a fifth consecutive loss for the benchmark S&P 500 index.

A turbulent day of trading on Wall Street ended Wednesday with a fifth consecutive loss for the benchmark S&P 500 index.

An early rally drove major indexes sharply higher but was gone by midday, leaving the market headed lower for the rest of the day. The Dow Jones Industrial Average swung from a high of 214 points to a low of 350 before the sell-off eased somewhat by late-afternoon.

Technology companies, banks and insurers fared the worst, their losses outweighing gains in other sectors.

“We’re still … contending with the implications of the sell-off from October,” said David Lefkowitz, senior equity strategist at UBS Global Wealth Management. “The market is still somewhat unsettled and somewhat volatile as investors digest that move and reposition for what they think will happen next.”

The latest losses placed the indexes on track to finish the month with a loss.

For the second straight day, stocks looked as if they were headed for a rebound early Wednesday. But the wave of buying didn’t hold.

Bond prices, which had been declining, also began climbing as traders favored safe-haven assets. That sent the yield on the 10-year Treasury note down to 3.12 percent from 3.14 percent late Tuesday.

Worries over rising oil production around the world and weakening demand from developing countries have been weighing on oil prices.

“When it first started going down in October there was some concern that demand was not going to hold up and it fed into those broader concerns that there was some softness in the broader economy,” Lefkowitz said. “More recently, it’s been more of a concern about too much supply.”

Forecasts calling for a cold snap across much of the Northeast and South helped push the price of natural gas sharply higher. It soared 17.9 percent to $4.84 per 1,000 cubic feet.

Technology sector companies took some of the heaviest losses. Apple dropped 2.8 percent to $186.80.

On the other end of the spectrum, media and communications companies led the gainers in the S&P 500. Comcast rose 1.5 percent to $38.29.

Shares in Pacific Gas & Electric had their steepest drop since 2002, sinking 21.8 percent to $25.59. The losses extending the electric utility’s steep slide this week. The company told regulators last week that it experienced a problem on a transmission line in an area of Northern California where a deadly wildfire erupted last week. People who lost homes in the blaze sued PG&E Tuesday, accusing the utility of negligence and blaming it for the fire. PG&E’s slide led a broad sell-off in utilities stocks.

Investors also had their eye on the latest batch of company earnings Wednesday.

Macy’s tumbled 7.2 percent to $33.22 as traders grew concerned that the department store chain may have difficulty keeping up its streak of sales gains, even after the company upped its annual earnings expectations.

Blue Apron shares declined 4.1 percent to $1.17 after the meal kit shipping company issued a disappointing fourth-quarter outlook and said it is taking “strategic actions” that included slashing 4 percent of its workforce.

US Energy Secretary in Prague to Lobby for Nuclear Industry