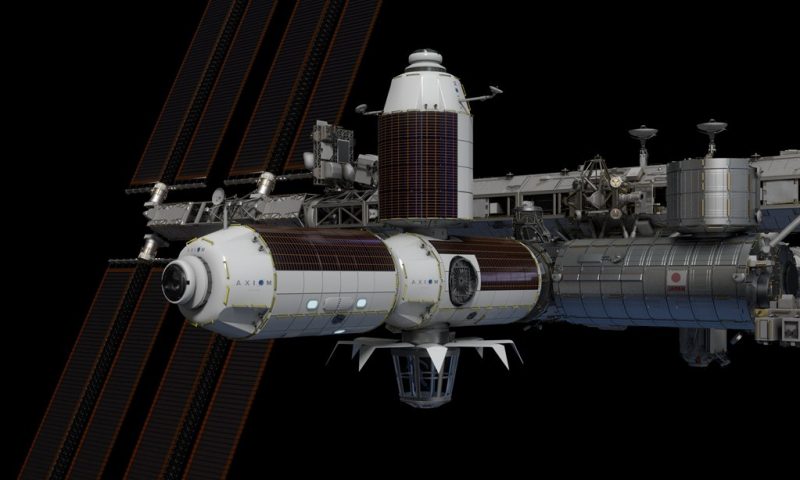 NASA has selected Axiom Space, a Houston-based startup partnering with Boeing and other aerospace contractors, to attach a commercial habitat to the International Space Station and begin constructing an orbiting complex that the company says could ultimately replace the international research outpost.

Axiom won a NASA competition to connect a commercial module to the forward port on space station’s Harmony module, or Node 2, officials announced Monday. NASA made available the port in a commercial solicitation last June, asking companies for proposals to join a public-private partnership with the space agency to develop and demonstrate technologies for a future commercial space station.

“Axiom’s work to develop a commercial destination in space is a critical step for NASA to meet its long-term needs for astronaut training, scientific research, and technology demonstrations in low Earth orbit,” said NASA Administrator Jim Bridenstine in a statement. “We are transforming the way NASA works with industry to benefit the global economy and advance space exploration. It is a similar partnership that this year will return the capability of American astronauts to launch to the space station on American rockets from American soil.”

NASA said it will begin negotiations with Axiom on a firm-fixed-price contract to build and deliver the module to the space station, with a five-year base performance period and a two-year option. NASA selected Axiom through a solicitation known as Appendix I in the space agency’s Next Space Technologies for Exploration Partnerships 2, or NextSTEP 2, program designed to foster public-private partnerships in spaceflight.

Axiom was founded in 2016 by Kam Ghaffarian, an aerospace industry entrepreneur, and Mike Suffredini, who was NASA’s program manager for the International Space Station from 2005 until 2015.

“We appreciate the bold decision on the part of NASA to open up a commercial future in low Earth orbit,” Suffredini said in a statement. “This selection is a recognition of the uniquely qualified nature of the Axiom team and our commercial plan to create and support a thriving, sustainable, and American-led LEO ecosystem.”

NASA says it selected Axiom to provide at least one commercial module for attachment to the space station. But Axiom has more ambitious objectives.

Axiom says it plans to build and launch several modules to form the “Axiom Segment” of the International Space Station. The company said it targets launch of the first module in the latter half of 2024.

The elements planned by Axiom include a node module, an orbital research and manufacturing facility, a crew habitat, and a “large-windowed Earth observatory” that is similar in appearance to the International Space Station’s cupola module. Axiom said the new commercial segment will add more research and habitation facilities to the ISS, and provide “novel avenues of research in areas such as isolation studies and Earth observation.”

Research currently conducted on the ISS could be transferred to the new commercial facility gradually to prevent interruptions with the ISS is retired, Axiom said in a statement.

While its partnership with NASA is focused on connecting a module to the International Space Station, Axiom plans to detach its commercial modules when the ISS reaches its retirement date, forming a standalone, free-flying commercial orbital station. Before the International Space Station is decommissioned and the Axiom Segment is detached, Axiom aims to launch a solar power platform to provide the commercial modules the electricity and cooling previously provided by the ISS.

Axiom also plans to launch crewed flights to the ISS and the ISS/Axiom complex at a rate of about two to three missions per year, the company said in a statement.

The industry team assembled by Axiom includes Boeing and Thales Alenia Space of Italy. Boeing and Thales built most of the pressurized modules on the U.S. segment the International Space Station, and Boeing’s Starliner commercial crew capsule could fly private astronauts to and from the ISS and the Axiom station.

Other partners identified by Axiom include Intuitive Machines and Maxar Technologies. Intuitive Machines was also co-founded in Houston by Ghaffarian, and Maxar is a leading manufacturer of large commercial satellites, including the Power and Propulsion Element for NASA’s planned Gateway mini-space station to orbit the moon.

“Axiom exists to provide the infrastructure in space for a variety of users to conduct research, discover new technologies, test systems for exploration of the moon and Mars, manufacture superior products for use in orbit and on the ground, and ultimately improve life back on Earth,” Suffredini said in a statement. “As we build on the legacy and foundation established by the ISS program, we look forward to working with NASA and the ecosystem of current and future international partners on this seminal effort.”

The U.S. government is in the process of approving an extension to NASA’s support for the International Space Station to 2028 or 2030. By that time, NASA managers hope commercial operators like Axiom could take over management of a replacement space station in low Earth orbit.

“We know the space station can’t last forever, and we need to move as quickly as we can to make sure we don’t have a gap in low Earth orbit,” Bridenstine said.

Turning over operations in low Earth orbit to the private sector would allow NASA to focus government spending on deep space exploration, such as human missions to the moon and Mars.

“In order to have commercial space stations, we need demand for activities in low Earth orbit, commercial demand,” Bridenstine said. “So things like we’re working on on the International Space Station, things like industrialized biomedicine and advanced materials, those are two areas where I think there’s a lot of promise for a demand for human habitation in low Earth orbit.”

Weeks after the studies were released, NASA announced it was opening up a port on the space station for a commercial company to connect its own module to the ISS. Axiom won the competition, and a NASA spokesperson said Monday that Axiom is the only company the agency will select for the Harmony port.

NASA also announced a pricing structure for private astronauts who launch on Boeing or SpaceX commercial crew spacecraft to live and work aboard the International Space Station.

There is already one experimental commercial module attached to the space station. The Bigelow Expandable Activity Module, or BEAM, was built by Bigelow Aerospace and launched to the station aboard a SpaceX Dragon cargo mission in 2016.

BEAM was built to test the viability of an expandable, or inflatable, soft-sided module to provide habitation for space crews, and NASA has been satisfied with the module’s performance. After analyzing technical results from the module’s first few years in orbit, NASA determined BEAM can safely remain at the ISS until at least 2028 to provide extra stowage volume.

In an interview last month with Spaceflight Now, Bridenstine said developing a commercial market and commercial technology for space habitation has been a “stumbling block” for NASA.

The space agency’s earlier emphasis in commercialization focused on launch and transportation for cargo and crews. Now it’s time to take the next step and commercialize human operations in low Earth orbit, Bridenstine said.

“It is a stumbling block, and yes we need to solve it,” he said. “There are two elements to it. One is the demand for habitation, and one is the supply. NASA has made huge investments in the supply of launch for both cargo and crew. We need to probably make some bigger investments into habitation in low Earth orbit.

“So there is no doubt a need there where NASA needs to lead, and we’re going to have to step up to the plate and do that,” Bridenstine said.

“I would say there are commercial partners out there that don’t necessarily need the port (on ISS),” Bridenstine said.

Due To New California Law, Uber Allows Some Drivers To Set Their Own Rates