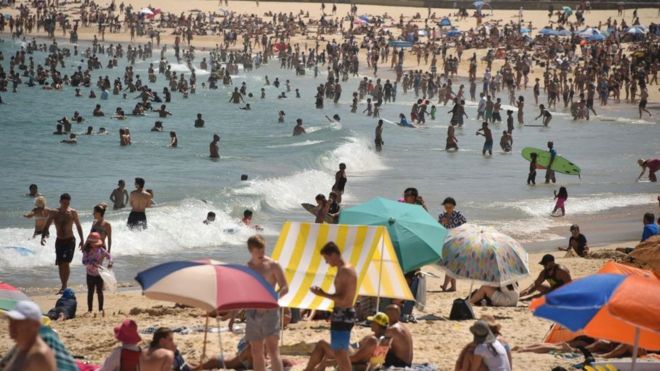 Australia has just sweltered through at least five of its 10 warmest days on record, authorities estimate.

An extreme heatwave has afflicted the nation since Saturday, causing wildlife deaths, bushfires and an increase in hospital admissions.

The town of Noona in New South Wales meanwhile recorded a night-time temperature of 35.9C.

Temperatures on Friday will soar above 42C in “broad areas”, the bureau predicted.

Forecasters have compared conditions to the nation’s worst heatwave in 2013, where the mercury soared to 39C for seven consecutive days.

The hottest day on record for Australia is 7 January 2013, when the national average maximum temperature was 40.3C.

“The current heatwave ranks alongside that of January 2013 as the most extensive and prolonged heatwave on record over Australia,” BOM senior meteorologist Blair Trewin told the BBC earlier this week.

“There have been other notable heatwaves but none affecting such a large area of the country.”

A large swathe of New South Wales is bearing the brunt of the heat, with temperatures also soaring in parts of Queensland, South Australia, Victoria and the Northern Territory.

Temperatures are expected to drop in southern and central areas over the weekend.

But meteorologists say they are then set to rise in Western Australia.

Parts of the state could see temperatures up to 14 degrees higher than average in the days to come.

Meteorologists say that the heatwave has broken heat records at more than 10 places around Australia, largely central inland locations.

Sixteen people in South Australia were admitted to hospital due to the heat on Wednesday, the state government said.

Authorities in several states have also issued health warnings urging people to stay indoors and minimise physical activity, with heightened concerns for the elderly, the chronically ill and children.

In coastal cities, many Australian flocked to pools, beaches and other watering holes to cool off.

Some people also shared their attempts to cool down on social media, including one Reddit user who wrote that he was “refrigerating my pyjamas to survive the stuffiness of my bedroom”.

Dozens of bushfires were burning across Victoria, Tasmania and New South Wales on Thursday in conditions exacerbated by the heat and drought.

There were also reports of mass deaths in native bat colonies in New South Wales, and fruit orchards spoiling under the sun.

How is climate change affecting Australia?

Last week, officials confirmed that 2018 and 2017 had been Australia’s third and fourth hottest years on record respectively.

The bureau’s State of the Climate 2018 report said climate change had led to an increase in extreme heat events.

Even if global temperatures are contained to the Paris accord limit of a 2C rise above pre-industrial levels, scientists believe the country is facing a dangerous new normal.

Parts of eastern Australia suffered their worst drought in recent history last year, while thousands of Australians fled their homes when bushfires swept through Queensland in November.

Portugal plans special lanes for Britons in airports after Brexit