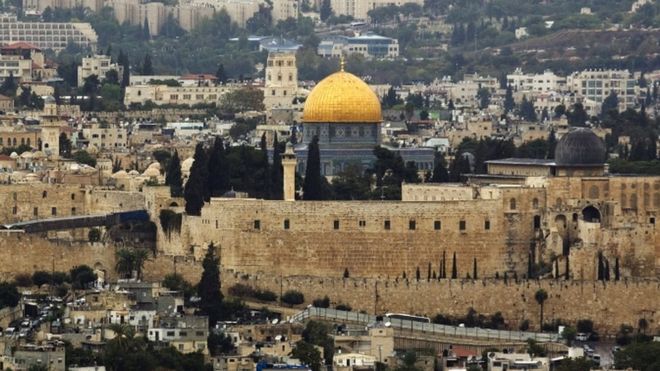 Australian Prime Minister Scott Morrison has confirmed that his government will recognise West Jerusalem as the capital of Israel.

However, he said Australia’s embassy would not move from Tel Aviv, until a peace settlement was achieved.

He added Australia also recognised the aspirations of the Palestinians to a state with a capital in East Jerusalem.

The status of Jerusalem is one of the most contested issues between Israel and the Palestinians.

Opposition Labor party leader Bill Shorten said he would reverse the decision if he won next year’s elections.

US President Donald Trump drew international criticism last year when he reversed decades of American foreign policy by recognising the ancient city as Israel’s capital. The US embassy was relocated from Tel Aviv to Jerusalem in May.

What did the Australian PM say?

Mr Morrison’s announcement comes after a period of consultation with politicians in Australia and allies abroad.

“Australia now recognises West Jerusalem, being the seat of the Knesset and many of the institutions of government, is the capital of Israel,” said Mr Morrison, speaking in Sydney on Saturday.

“We look forward to moving our embassy to West Jerusalem when practical… and after final status determination.”

Mr Morrison said that in the interim Australia would set up a defence and trade office in West Jerusalem.

The prime minister also stressed that Australia was supporting “liberal democracy” in the Middle East.

Scott Morrison’s venture into Middle Eastern politics was a surprise to many at home. The PM said Australia should use its “incredible influence” with Israel to try to end a “rancid stalemate” in the region.

In October, Mr Morrison said he found arguments in favour of moving Australia’s diplomatic presence from Tel Aviv to be “persuasive”.

He denied his comments were an attempt to influence Jewish voters in a crucial by-election in Sydney.

Others believe he is out of his depth. Australia’s federal opposition leader Bill Shorten said the decision not to relocate the embassy to West Jerusalem was a “humiliating backdown… by an L-plate prime minister”.

It is not a complete U-turn, though. Australia is now one of the few countries to officially recognise West Jerusalem as Israel’s capital. Leaving the embassy in Tel Aviv should defuse some of the diplomatic anger simmering among Palestinian leaders and others, who had threatened trade and political sanctions if the move went ahead.

What is the background?

When Mr Morrison first announced the policy review in October, he said his thinking had been guided by Australia’s former ambassador to Israel, Dave Sharma.

At the time, Mr Sharma was the government’s candidate in a by-election in Sydney, but Mr Morrison denied his comments were aimed at the large Jewish community there. Mr Sharma lost the election, costing the governing coalition its one-seat majority.

The policy review drew support from Israel, but criticism from the Palestinian side. The move also angered Australia’s neighbour Indonesia, halting talks on a bilateral trade deal with the world’s most populous Muslim nation.

Some commentators said Mr Morrison, who is widely expected to lose elections next year, had sought to ease tensions with his distinction between East and West Jerusalem and by holding back on any embassy move.

“It is a combination of him being caught out by making an injudicious remark at a by-election, and then having to walk back from it,” Rodger Shanahan, from Sydney-based think-tank the Lowy Institute, told AFP news agency.

Mr Morrison’s predecessor, Malcolm Turnbull, had ruled out following the US in moving Australia’s embassy to Jerusalem.

Two other countries – Guatemala and Paraguay – have announced they would also make the switch, but Paraguay later reversed the decision after a change of government.

Why is the status of Jerusalem so contentious?

The status of Jerusalem goes to the heart of the Israeli-Palestinian conflict.

Israel regards Jerusalem as its “eternal and undivided” capital, while the Palestinians claim East Jerusalem – occupied by Israel in the 1967 Middle East war – as the capital of a future state.

Israeli sovereignty over Jerusalem has never been recognised internationally, and according to the 1993 Israel-Palestinian peace accords, the final status of Jerusalem is meant to be discussed in the latter stages of peace talks.

Since 1967, Israel has built a dozen settlements, home to about 200,000 Jews, in East Jerusalem. These are considered illegal under international law, though Israel disputes this.

In December 2017, UN member states voted decisively at the General Assembly in favour of a resolution effectively declaring US recognition of Jerusalem as Israel’s capital to be “null and void” and demanding it be cancelled.