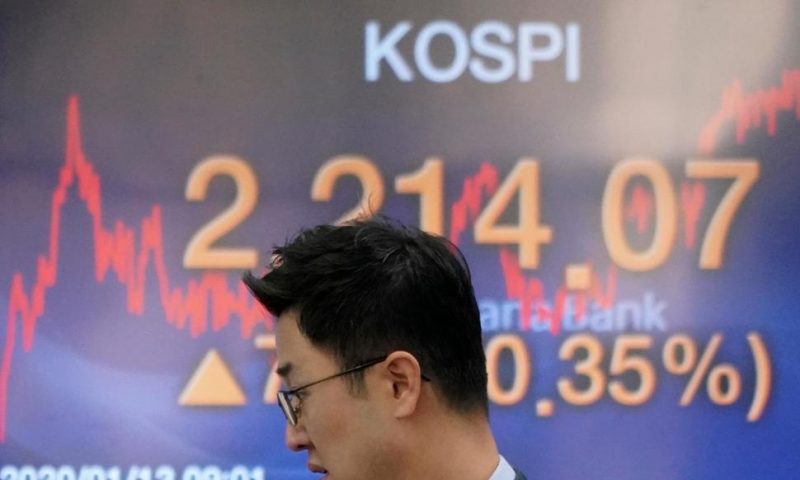 Asian stocks have risen as investors shrug off weaker-than-expected American jobs data and look ahead to the signing of a U.S.-China trade deal.

BEIJING — Asian stock markets rose Monday ahead of the signing of a U.S.-Chinese trade pact as investors shrugged off weaker-than-expected American jobs data.

Benchmarks in Shanghai, Hong Kong and South Korea advanced. Japanese markets were closed for a holiday.

Traders looked ahead to this week’s signing of an interim U.S.-Chinese trade deal, which they hope will be a step toward ending a tariff war that threatens to drag down global economic growth.

The “Phase 1” agreement has helped to ease market jitters, though economists warn it leaves major disputes unresolved and the outlook for negotiations is unclear.

Investors also were encouraged by President Donald Trump’s decision to resume a regular trade policy dialogue with Beijing that Washington pulled out of in July 2017.

Markets start the week “on a cautiously optimistic tone” as investors look ahead for the possibility of further U.S.-China trade progress, said Mizuho Bank in a report.

However, “thornier issues such as enforcement may come back to haunt further negotiation progress,” the bank warned.

India’s Sensex opened up 0.7% at 41,887.16. Taiwan advanced while Singapore and New Zealand retreated.

The chief American negotiator, Robert Lighthizer, said Beijing agreed to make changes to address U.S. complaints it steals or pressures companies to hand over technology. Chinese officials have yet to confirm that.

On Friday, U.S. stocks retreated from record highs following a Labor Department report employers added 145,000 jobs in December, short of the 160,000 forecast. That growth was solid enough to bolster Wall Street’s view the job market is holding up and households can spend.

ENERGY: Benchmark U.S. crude gained 11 cents to $59.15 per barrel in electronic trading on the New York Mercantile Exchange. The contract lost 52 cents on Friday to close at $59.04. Brent crude, used to price international oils, advanced 6 cents to $65.03 per barrel in London. It declined 39 cents the previous session to $64.98.