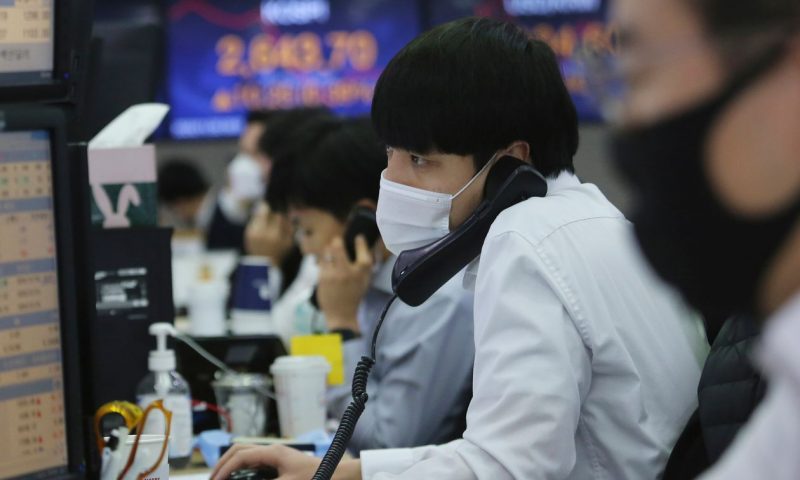 TOKYO — Asian shares largely fell on Monday on renewed caution despite a record high finish on Wall Street last week driven by hopes for a COVID-19 vaccine and relief for the global economy.

Stephen Innes, chief global market strategist at Axi, noted that despite ups and downs investors are looking toward the arrival of vaccines for a gradual return to business as usual.

“Vaccines offer the promise that the major disruptions of the pandemic will fade from the scene in 2021. Economic life will gradually heal; the world will start to move on from all the human suffering that the virus has wrought,” said Innes.

Positive developments on the vaccine front have driven double-digit gains in the major indexes this month as investors look forward to progress in gaining control over the pandemic that plunged the global economy into its deepest slump since the 1930s. That optimism persisted last week even as one vaccine candidate suffered a setback and cases of coronavirus remain high around the world.

The University of Oxford and AstraZeneca AZN, +0.01% have released positive test results about their vaccine. Hopes for a vaccine have offset concerns about spiking coronavirus cases in the U.S. and other parts of the world. U.S. states and European governments are re-imposing controls on business and travel as infection rates surge.

Worries are also growing in Asia, including Japan and South Korea, about another wave of infections. Tokyo is reporting several hundred new cases a day, often setting new records. The disease has killed more than 1.4 million people worldwide, according to data gathered by Johns Hopkins University.

The OPEC nations, led by Saudi Arabia, will be meeting virtually on Monday to decide, once again, how much oil their members should produce as lockdowns related to the coronavirus stifle demand for crude. They’re expected to extend production cuts well into the new year, in an effort to boost volatile oil prices.

The group has to reach agreement among its member countries and the additional members in the group known as OPEC Plus, which is led by Russia.