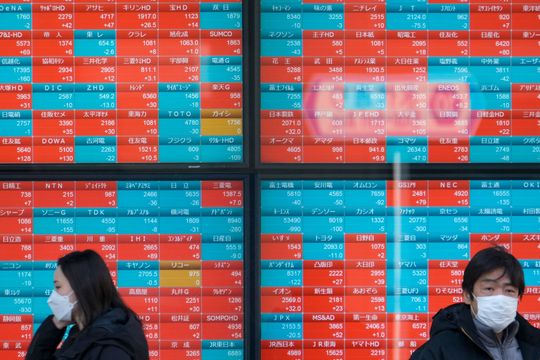 Global stock markets have been turbulent since Russia invaded Ukraine last week. Stocks have swung wildly amid uncertainty about how much Russia’s invasion will push up inflation, particularly oil and natural gas prices, and drag on the global economy.

“It’s all about the Russia-Ukraine situation and evolutions in that situation will drive market sentiment and direction,” Jeffrey Halley of Oanda said in a commentary.

“President Putin will now have to accept that the ‘Western’ powers are prepared to accept quite a bit of economic pain now to punish Russia,” he said.

Although the Asian region is unlikely to suffer direct damage from the war in Ukraine, higher energy prices are likely to prove devastating, especially for oil-importing nations like Japan.

“As ties between Russia and Europe worsens, it brings into question whether Russia’s trade relationship with China will strengthen,” said Yeap Jun Rong, market strategist at IG in Singapore.

Russian forces have encountered strong resistance from Ukraine defenders, and U.S. officials believe the invasion has been more difficult than the Kremlin envisioned.

Uncertainty about interest rates and inflation is adding to the worries to the economies, already hit for two years by the coronavirus pandemic and its curbs on travel, trade and economic activity.

Also adding to worries is how the U.S. Federal Reserve has suggested it will raise short-term interest rates next month by double its usual increase, the first rate increase since 2018. Higher U.S. rates tend to put downward pressure on all kinds of investments, and can have global repercussions.

Biocon Unit to Buy Viatris’ Biosimilars Business for $3.34B