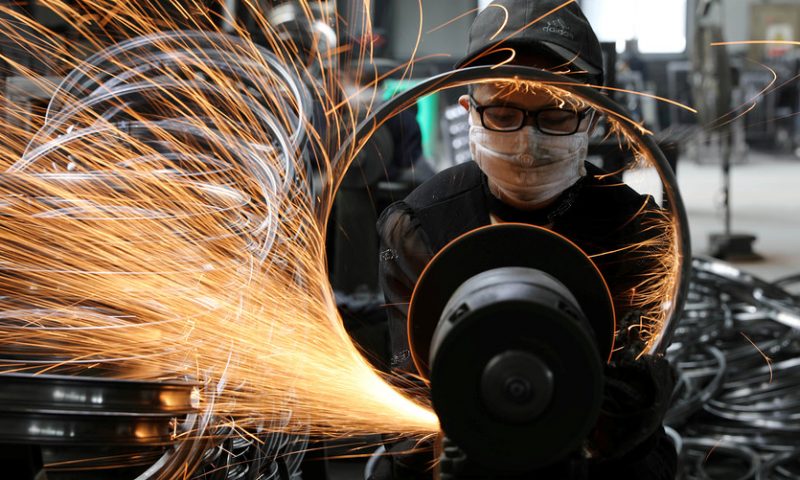 On Sunday, a new report showed China’s trade with the U.S dropped sharply in August, as new tariffs by both sides were announced. Imports of American goods tumbled 22% in August from a year earlier to $10.3 billion, customs data showed Sunday. Exports to the United States, China’s biggest market, sank 16% to $44.4 billion.

More tariffs went into effect on Sept. 1, and the next round of tariffs on Chinese goods is scheduled to take effect Oct. 15. Last week, the U.S. and China said they have agreed to renew trade negotiations in early October.

On Monday, the Japanese government released revised economic growth data for the April-June quarter. The Cabinet Office said gross domestic product, or GDP — the total value of a nation’s goods and services — had grown at an annual rate of 1.3%.

“A mixed set of leads sets Asia up for a muted start to a week focused on monetary policy. China’s trade data had been one to disappoint over the weekend after further monetary stimulus announcements,” said Jingyi Pan, market strategist at IG in Singapore.

The jobs report was the latest in a mixed batch of economic data that investors scrutinized this week in search of clues about how the economy is weathering the costly trade war between the U.S. and China. Their concern: tariffs that each side has imposed on billions of goods may be dampening global economic growth and threatening to nudge the United States into a recession.

Mixed economic data aside, investors have been encouraged this week by news that envoys from Washington and Beijing plan to begin another round of trade talks next month.

Markets have been turbulent in recent weeks as worries about the trade war have waxed and waned. But Wall Street got a modest bounce Friday afternoon after Federal Reserve Chairman Jerome Powell said the central bank is not expecting a U.S. or global recession. In remarks at a conference in Switzerland, Powell noted that the Fed is monitoring a number of uncertainties, including trade conflicts, adding the Fed will “act as appropriate to sustain the expansion.”

Economists said Friday’s jobs report did little to change their forecasts for the Fed to cut interest rates at its meeting in two weeks. Treasury yields dipped following the report, and traders remain nearly certain that the Fed will cut short-term rates by a quarter of a percentage point.

It would be the second such cut since August, following nine increases since December 2015, as the central bank tries to cushion the blow on the economy from the U.S.-China trade war. U.S. manufacturing has already slid due to the tensions, and the worry is that businesses could pull back on their spending next.