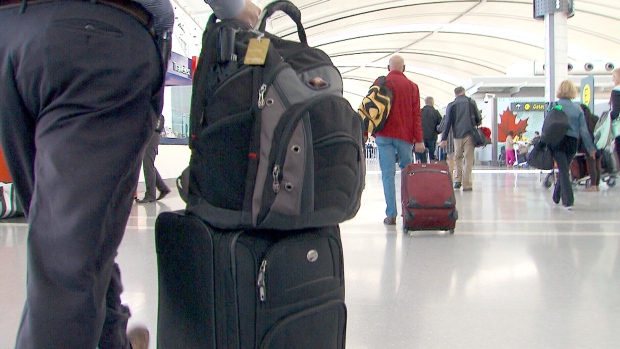 Buckle up: Now that Air Canada and WestJet have hiked their checked bag fees for economy fares, some airline experts predict charges for carry-on luggage could be next.

“It’s only a matter of time,” said airline analyst, Fred Lazar. He believes higher checked bag fees will inspire even more people to stuff all their luggage into carry-on bags, prompting the two airlines to introduce carry-on charges to help stem the tide.

“The initial driver will be the problems as people shift more and more to carry-on,” said Lazar, a professor of economics at York University in Toronto.

Airlines are already grappling with a large influx of carry-on luggage which can lead to delays as passengers jockey for overhead bin space. Some carriers have already initiated carry-on bag fees to help combat the problem — and increase profits.

Lazar believes Air Canada and WestJet will follow suit as early as the winter when Canadians also cram big coats into overhead bins.

‘Riding out the carry-on wave’

Both Air Canada and WestJet have increased their checked bag fee for most economy fares from $25 to $30 for the first bag, and from $35 to $50 for the second one.

The new fee adds up to $60 for one checked bag on a round trip.

“I just kind of sucked it up and paid it. But then I was like, ‘What am I doing?'” said Canales who lives in Saint John, N.B.

“Now I just stuff as much as I can into my carry-on. I’m riding out the carry-on wave as long as I can.”

He believes the checked bag fee hike will only encourage more people to do the same.

But logistical problems are expected if more passengers start stuffing as much as possible into their carry-on bags.

“It’s trying to find that space to stuff a bag and it just takes longer for people getting on the plane,” said Barry Prentice, an airline analyst and professor at the University of Manitoba.

“One of the consequences of this sort of policy is a loss of utilization and delays.”

WestJet said it has “no plans at this time to charge for carry-on.” Air Canada didn’t respond to the question. But other airlines have turned to charging for carry-on luggage to improve the boarding process.

“This new policy will speed up the boarding and cut flight delays,” said Ryanair in a statement.

In 2010, discount U.S. carrier, Spirit Airlines, introduced carry-on fees with the same rationale. Then CEO, Ben Baldanza, pledged the charge, which is pricier than checking a bag, would lead to a speedier boarding process and more room in overhead bins.

“Everybody wins,” he said in a company video where he actually lies in an overhead bin.

Canadian ultra low cost carriers, Flair Airlines and WestJet’s Swoop also charge for carry-on luggage, a policy they adopted from the outset. The fee, which starts at $36.75, is higher than their checked bag charges.

Prentice believes Air Canada and WestJet could soon start charging for carry-on bags in order to ramp up the boarding process and increase profits, as the fee-based model becomes the norm for economy fares.

“It may be easier to raise fees than to raise fares,” he said. “They see this as being something that people are more adjusted to.”

But not everyone is on board. Toronto-based airline consultant Robert Kokonis argues the $5 increase for a checked bag per flight won’t spark a mass rush for the overhead bins.

“I’m not worried about a panic in the cabin because you’ve already had these bag charges for [four] years.”

He also believes Air Canada and WestJet won’t charge for carry-on luggage, because that’s not their business model.

However, airline analyst Lazar argues when Air Canada started charging for things such as pillows and meals, no one at the time thought it would become the norm.

“Everybody said this is stupid, people won’t stand for it,” Lazar said. “And then every other airline adopted it.”

If WestJet and Air Canada do start charging for carry-on luggage, passenger Canales says he’s still determined to avoid the fee — by taking advantage of the one thing that will still be free — a personal bag that fits under the seat.

“I’ll probably have to start shoving everything in my backpack, or putting on 10 layers of clothing.”