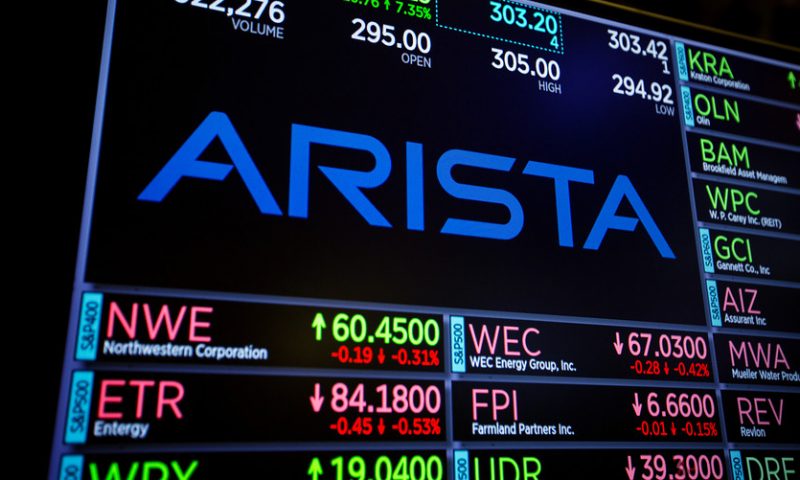 Another ‘cloud titan’ customer pauses orders, but this time it isn’t so temporary

Shares of computer networking company Arista Networks Inc. suffered a record plunge Friday in the wake of a very downbeat revenue outlook, after another “cloud titan” customer informed the cloud networking company of a “material reduction” in orders.

That led to a number of downgrades by Wall Street analysts, and a slew of stock price target cuts.

Arista said late Thursday it expects fourth-quarter revenue of $540 million to $560 million, well below the FactSet consensus of $686 million.

“After we experienced the pause of a specific cloud titans order in Q2 2019, we were expecting a recovery in second half 2019 for cloud titan spend. In fact, Q3 2019 is a good evidence of that,” Chief Executive Jayshree Ullal said on the post-earnings conference call with analysts, according to a FactSet transcript. “However, we were recently informed of a shift in procurement strategy with a material reduction in demand from a second cloud titan,reducing their forecast dramatically from original projections for both Q4 2019 and for calendar 2020.”

Chief Financial Officer Ita Brennan said on the call while the company wasn’t in a position to provide “overall guidance” for 2020, demand from the cloud business can be expected to be “flat to down” next year.

Of the 30 analysts surveyed by FactSet, no less than seven have downgraded Arista’s stock and 16 have cut their price targets. Most analysts (60%) now rate the company the equivalent of hold and one is now bearish, compared with 55% bulls and no bears prior to the results. The average price target has declined to $234.91, from $295 a month ago.

J.P. Morgan analyst Samik Chatterjee cut his rating to underweight, after being at neutral since May 2018. He slashed his price target by 39% to $180 from $290.

Chatterjee believes the latest cloud titan to cut spending is Facebook Inc. FB, +1.03%  , which Arista said is one of just two customers representing more than 10% of revenue, the other one being Microsoft Corp. MSFT, +0.24%

He said his new bearish view is because he believes “the path forward for [Arista] shares to be extremely challenging” into next year given the disappointing guidance, and because he expects “substantially higher volatility” in spending from Arista’s primary customers and a lack of visibility into growth trends.

Stifel Nicolaus’s John Marchetti, who also believes the cloud titan is Facebook, lowered his rating to hold, after being bullish for about a year, and his price target to $193 from $287. His disappointment in the outlook stems from management’s recent assertion that cloud spending would return to a more normalized rate.

“Additionally, we see few near-term catalysts for shares and believe the next opportunity to return to growth is the coming 400G upgrade cycle, which we do not expect to begin until 2H20 and ramp in 2021,” Marchetti wrote in a research note.

Analyst Michael Genovese kept his rating at neutral, but dropped his price target to $210 from $275.

“On the one hand, the revenue estimates and the stock have been aggressively reset,” Genovese wrote. “On the other hand, the cloud outlook is significantly worse and there are meaningful deferred revenue headwinds in 2020.”

For the third quarter, Arista reported revenue rose 16% to $654.4 million, above the FactSet consensus of $653.3 million. Net income grew 24% to $208.8 million, or $2.59 a share, while earnings excluding nonrecurring items were $2.69 a share to beat expectations of $2.41, according to FactSet. The company has beat both profit and revenue expectations every quarter since going public.

Why the oil market’s ‘risk premium’ has disappeared — for now