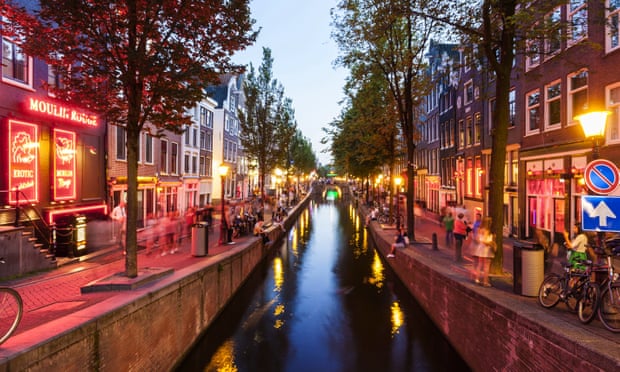 Amsterdam is to ban guided tours of its red-light district as part of an effort to restrict the increasing throngs of visitors in its historic city centre, and because “they are not respectful” to sex workers.

“It is no longer acceptable in this age to see sex workers as a tourist attraction,” city councillor Udo Kock said. A survey has shown that 80% of sex workers say gawping tourists are bad for their business and councillors last year suggested moving the red light district to another part of the city.

Fuelled by cheap flights and online booking, tourist numbers in Amsterdam – a city of 850,000 residents – rose to 19 million in 2018, with mayor Femke Halsema predicting 29 million by 2025. The medieval city centre is becoming increasingly unlivable, residents say.

The ban, which comes into effect on 1 January, will cover paid and free tours, which according to the city council have “a magnetic effect” on visitor numbers.

The maximum number of people allowed on organised tours of the rest of the city centre will be reduced from 20 to 15, and guides will have to have a council permit and quality check, and observe strict rules of behaviour.

According to the Algemeen Dagblad newspaper, a proliferation of pub and bar crawls, as well as tours with names such as “Red light tours with Mistress Lola”, has led to more than 1,000 tour groups every week pausing on the Oudekerksplein, a square in the middle of the red-light district, with a record of 48 in one hour.

Amsterdam city council has taken several measures aimed at reducing the overcrowding and nuisance caused by tourism in the city centre, and the red-light district in particular. Streets are now closed on busy evenings to allow them to be cleaned, while city hosts point visitors in different directions.

The Dutch capital has also launched initiatives to curb the number of shops targeting visitors, clamped down on Airbnb, called a halt to new hotel developments and increased taxes on tourists.