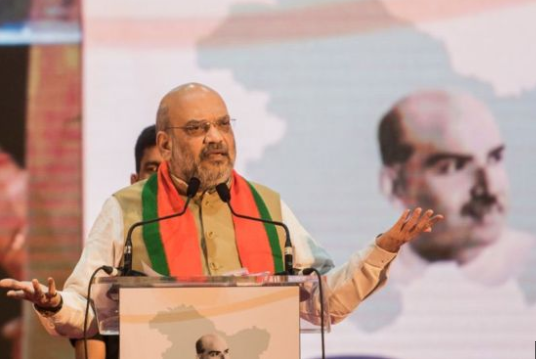 India’s Home Affairs Minister, Amit Shah, has vowed to remove illegal migrants from the state of West Bengal through a registration scheme like that used recently in the state of Assam.

The prospect of a scheme like the National Register of Citizens (NRC) being introduced is likely to exacerbate widespread fear within the state, reports BBC Hindi’s Nitin Srivastava.

“The chief minister [of West Bengal] says she will not let NRC happen in West Bengal, but I am assuring you, each and every infiltrator in India will be shown the door,” Mr Shah told a packed rally in the state capital, Kolkata (formerly Calcutta).

The state is currently ruled by the Trinamool Congress (TMC), a regional party led by Mamata Banerjee, a firebrand politician who has been a bitter political opponent of Prime Minister Narendra Modi and his party.

The NRC is a list of people who can prove they came to the state by 24 March 1971, the day before neighbouring Bangladesh declared independence from Pakistan.

Recently implemented in the north-eastern state of Assam, the final version of the list effectively stripped 1.9 million people in the state of their citizenship, although they have been given 120 days to appeal.

India’s ruling Bharatiya Janata Party (BJP) distanced itself from the final list in Assam, but party workers in other parts of the country have been upping the rhetoric in its favour, asking for it to be implemented in other states.

The process in Assam has been long and controversial, and many have criticised the human toll. Families have been split apart, people are believed to have killed themselves because of it, and scores of people have been placed in detention centres on the suspicion of being “foreigners”.

Although a process has not been formally announced in West Bengal, its looming presence is said to have already caused tragedy.

Ananda Roy, 38, killed himself allegedly because he had been worried that he did not have enough documents to “prove” he was Indian.

Ananda was 11 months old when his Bengali-Hindu parents migrated to India from Bangladesh due to alleged discrimination against them.

“Ever since the drive began to identify illegal citizens in Assam, our family has been in constant fear. Though we have voting rights in India, we never had land or supporting documents. Ananda was particularly disturbed about this and kept saying we may be sent back to Bangladesh,” Mr Roy’s elder brother, Dakshada Roy.

Kamal Hossain Mondal, 36, a brick kiln labourer from North 24 Parganas- a district which witnessed large-scale migration of both Hindus and Muslims from Bangladesh in 1947 and 1971 – is another who is believed to have killed himself because he feared being left off the NRC.

His family filed a police report after his death, saying that he had expressed fears that he would be “arrested and put inside an illegal immigrant detention centre”. His failed attempts to retrieve his father’s land ownership documents that would have “proven” his citizenship had reportedly exacerbated his anxiety.

Many critics of the NRC say that the bill is a thinly veiled ploy to strip poor Muslims of their Indian citizenship.

Although the government has denied this, critics point to its attempts to push through the Citizenship (Amendment) Bill, which would effectively guarantee Indian citizenship to non-Muslim migrants from Pakistan, Bangladesh and Afghanistan.

Mr Shah underlined this during Tuesday’s speech saying, “I today want to assure Hindu, Sikh, Jain, Buddhist and Christian refugees, that you will not be forced to leave India. Don’t believe rumours. Before NRC, we will bring Citizenship Amendment Bill, which will ensure these people get Indian citizenship.”

Supporters of the bill , which has yet to be passed by parliament, say Muslims are only excluded as it seeks to protect religious minorities fleeing persecution in neighbouring countries.

With a population of more than 91 million, West Bengal is India’s fourth most populous state and almost one-third of its citizens are Muslims.

The chief minister, Ms Banerjee, has been vocal in her opposition to the NRC, but worry seems to have taken firm root in the state.

In August this year, some Muslim organisations distributed pamphlets, held seminars and asked people to keep their identification papers ready, in case “NRC is suddenly thrust upon them”.

“Ever since the construction of a massive new detention camp began in Assam for illegal citizens – most being Muslims as per the final NRC list – life hasn’t been normal,” Mohammad Nasirullah told, “We better have all [our] documents ready. After all, it’s assumed that many of us are illegal citizens.”