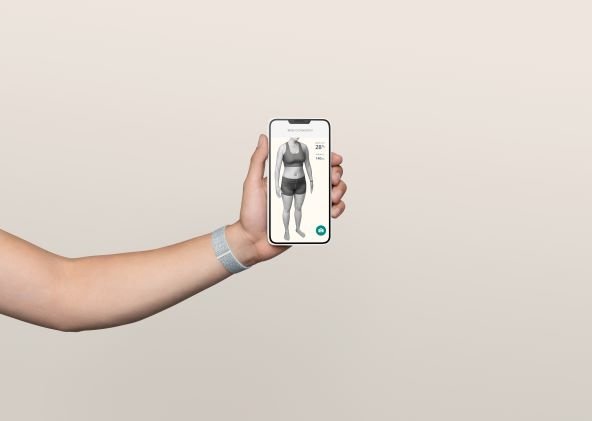 Forget about traveling to a lab for a pricey X-ray to get an accurate measurement of body fat percentage—Amazon’s Halo app can do it with just four smartphone photos and the app’s built-in machine learning algorithms.

A new Amazon-sponsored study of Halo’s Body feature found that it produced body fat measurements with accuracy comparable to the gold standard technique of dual-energy, X-ray absorptiometry, or DXA. The app also outperformed a handful of professional- and consumer-quality smart scales and the air-displacement method for measuring body fat.

The tool asks users to take four photos of themselves—showing the front, back and each side of their bodies—using their smartphone camera. From there, the app builds a 3D model.

The Body app then estimates the user’s current percentage of body fat and also offers a slider tool showing how their physical appearance might change as amounts vary from 13% to 50%.

Body works by using a deep neural network to analyze the shape of a user’s body and so-called “hot spots” for body fat, including the torso, thighs and mid-back. The AI algorithm then produces its body fat estimation within seconds.

According to the study, conducted with researchers from Massachusetts General Hospital and Louisiana State University’s Pennington Biomedical Research Center, the app’s estimations not only closely matched those produced through DXA, but were also the closest match to DXA’s measurements of all the methods examined.

Those other methods included the use of three consumer smart scales, two professional-quality smart scales and air-displacement plethysmography, where an individual is sealed into a pod that determines their total volume by measuring the amount of air displaced by their body.

A total of 134 adults were included in the study. This group, which was about 61% female, ranged in age from 21 to 76 and also represented a range of ethnicities and body mass indexes, according to the company.

Body’s visual body composition method was found to be twice as accurate as the at-home smart scales at estimating body fat, as well as significantly more accurate than all other methods sampled when compared to DXA measurements.

Despite this demonstration of the Halo app’s accuracy and the tool’s ability to provide a clearer picture of a user’s health than basic BMI measurements, the study results should be taken with a grain of salt due to the small sample size and Amazon’s financial backing of the study—though the company noted that it was not involved in data collection.

Additionally, Body does not break down its estimates into the different types of body fat, including relatively harmless subcutaneous fat and the more dangerous visceral fat.

The Body feature was included last August in the launch of Amazon’s Halo platform, which includes the app and an accompanying wearable device. Besides measuring body fat, the platform’s features so far include tracking sleep and fitness and using built-in microphones to analyze emotional well-being from a user’s speech patterns.

“Any health and wellness journey requires two important elements: information and action. At Halo, we believe in leveraging the power of Amazon’s technological know-how to provide our members with the most relevant health information possible,” the Halo team wrote in a blog post about the study’s results.

“That’s what Body is all about—arming you with accurate, clinically relevant information about your body composition that can help you (and your care provider if you choose to share with them) decide how to proceed on your unique health journey. We know that sometimes new information like this can be challenging to take in, but you can rest assured that it is accurate,” they wrote.