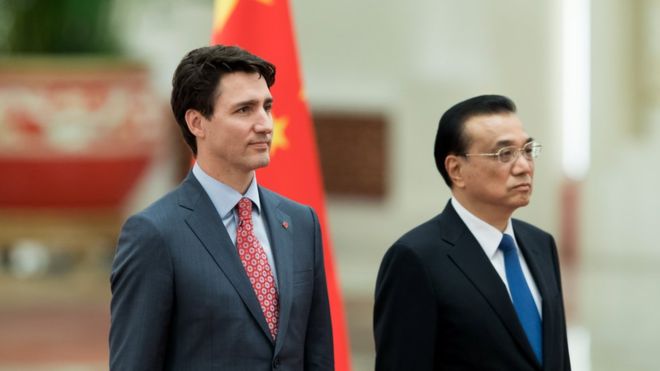 The arrest of Chinese telecoms executive Meng Wanzhou at the request of Washington sent the Chinese-Canada relationship spiralling into crisis. Caught between two superpowers, what are Canada’s options?

When Wenran Jiang heard the news that Canada had detained Huawei executive Meng Wanzhou, he knew it spelled trouble.

In an op-ed in a national Canadian newspaper he “called for all sides to cool down”, the senior fellow at University of British Columbia’s Institute of Asian Research told the BBC.

“That was literally the second day the news broke, because I knew this was not easy to navigate.”

He predicted the 1 December arrest of the high-profile Chinese senior executive could “snowball out of control” and do “permanent damage to a delicate Canada-China-US relationship”.

The US is requesting Ms Meng’s extradition on charges of violating US sanctions on Iran through Huawei’s business dealings, allegations that she and the company deny.

Soon after Ms Meng – who is also the daughter of Huawei’s billionaire founder Ren Zhengfei – was arrested, China demanded that Canada release her or face consequences.

‘Freeze’ that could last years

Many analysts believe they were tit-for-tat detentions.

A third Canadian national was arrested this week, though Canadian officials say this latest incident does not immediately appear linked to the Huawei dispute.

The diplomatic conflict has also had an impact on Canadian business interests.

“They’ve told us they’re going to continue doing the due diligence, but any manufacturing decision is going to have to wait out the resolution [of Ms Meng’s case],” Flavio Volpe, the organisation’s president, told the BBC.

“And they’re talking about a freeze that could be years, not weeks.”

Parka maker Canada Goose has also been affected, announcing it’s putting off the planned opening of its first store in China amidst public anger at Ms Meng’s arrest.

The Global Times – the state-backed Chinese newspaper – has warned that “Canada’s farming and forest sectors may be next in line to feel the pain due to China’s soured relations”.

David Mulroney, a former Canadian diplomat to China, says the relationship between the two countries has always had its ups-and-downs.

But he says “we’re going into a fairly deep valley. And I think we’ll be in it for some time”.

He also said Canada made for a “handy scapegoat” for China to “kick and whack” for the arrest while it works out its trade dispute with the US.

Canada’s crisis management tactic has been to state that there has been no political interference in Ms Meng’s arrest and that the extradition proceedings are being conducted in accordance with the rule of law.

It’s an appeal China has so far rejected.

On Tuesday, Chinese foreign ministry spokeswoman Hua Chunying was asked about recent remarks on the case by Canada’s Foreign Minister Chrystia Freeland and her US counterpart Mike Pompeo.

Ms Hua, calling Ms Meng’s detention “illegal”, said that “whatever dignified excuse they may use or whatever ‘legitimate’ cloak they may try to put on, they will be ridiculed for all these flagrant disregard for facts and the contempt of the rule of law”.

On Canada’s diplomatic efforts, Mr Jiang said: “You cannot continue to repeat the same line when the other party is not even accepting the legitimacy of that explanation”.

He says a few things have fuelled China’s scepticism and muddied Canada’s message.

First were remarks by US President Donald Trump last week that he could intervene in the Huawei executive’s case if it helps to avoid a further decline in US relations with China.

Mr Jiang said that China was frustrated by reports of efforts by Australia, the US, Canada, New Zealand and the UK intelligence agencies to block Huawei – one of its leading tech companies – from supplying equipment for their next-generation 5G wireless networks over national security concerns.

He also said that Chinese officials have made note of criticism, including by American economist Jeffrey Sachs, of the United States’ request for Ms Meng’s extradition to face charges of violating US sanctions on Iran.

On Wednesday, Prime Minister Justin Trudeau said that Canada stands up for its citizens in difficulty abroad “by applying a set of robust principles around rule of law, around expectations the rule of law will be followed around the world”.

He pushed back at questions from journalists on whether it was time for Canada to do more to tackle this diplomatic crisis.

“In many cases, escalation or very strong political statements can actually end up being counterproductive to the goal, which is to get Canadians freed, to get Canadians back home to safety,” he said.

Former diplomat Mr Mulroney says Canada has few options now but to let the legal process for the extradition run its course.

“We’re in a terrible situation but we’ve got to have the courage to continue to focus on what’s right and to continue to make our case not just in Beijing but with a lot of like-minded countries who might be able to help us,” he said.

Meanwhile, former Canadian foreign minister John Manley told the BBC that “Canada is alone in the world on this”.

“I don’t know what the United States is offering us in return for this pain. The tariffs on steel and aluminum and softwood lumber are still there,” he said.

Both he and Mr Jiang suggest Canadian officials should take a hard look at the merits of the US case for extradition, especially in the wake of Mr Trump’s remarks suggesting he would intervene if it could help achieve a trade deal with China.

“I think we have to do a good assessment of what’s in our interests in this case,” Mr Manley said.

And Mr Jiang says the case has gone beyond declarations that Canada is simply complying with its extradition treaty obligations.

He suggests Mr Trudeau get on the phone to Chinese Premier Li Keqiang to discuss the dispute directly, and that Ms Freeland offer to fly to Beijing if necessary to make the case it is not part of a conspiracy with the US, as Chinese officials have charged.

Mr Jiang said a case could be made for a crisis group to be established between the countries to ensure communications at the diplomatic level on both Ms Meng’s case and on those of the Canadians currently in Chinese custody.

Ms Meng, who has been released on bail, is next due to appear in court 6 February.