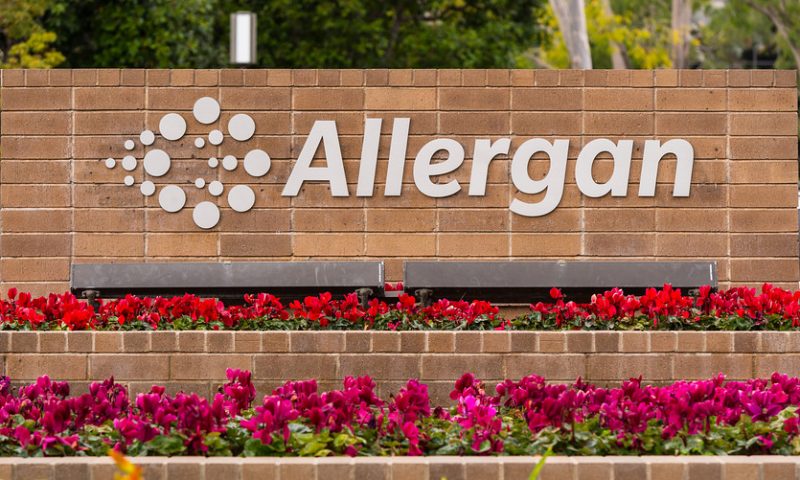 Allergan stock is soaring toward a 7-month high

Shares of Allergan Plc soared Tuesday after news broke that the company was being acquired by pharmaceutical giant AbbVie Inc. in a deal worth about $63 billion.

Under the terms of the deal, Allergan shareholders will receive $188.24 in cash and stock for each Allergan share — a 45% premium over Botox maker’s closing share price on Monday. The per-share bid is comprised of $120.30 in cash and 0.8660 shares of AbbVie stock.

The news came as a surprise to Wall Street analysts; they had expected Allergan to split itself into two businesses in an effort to boost shareholder value. But most agreed that the acquisition was an excellent thing for Allergan shareholders.

It’s “a major bailout for Allergan shareholders that before today were hoping for a split as a salvaging event,” Jefferies health-care trading desk strategist Jared Holz wrote in an email to clients Tuesday morning.

Elliot Wilbur of Raymond James said the deal was “Christmas in June for Allergan shareholders.”

It has been a rough couple of years for Allergan, whose stock lost about half of its value from a two-year high of $256.15 in July 2017, a decline driven by drug trial setbacks and falling sales due to generic competition. Generic versions of Allergan’s Estrace vaginal cream, Alzheimer’s drug Namenda and benign prostatic hyperplasia drug Rapaflo entered the market in 2018, and blockbuster dry-eye treatment Restasis is losing patent protection. The company has said that more products will lose patent protection in the next few years.

Investors have also been worried about the future of the company’s biggest earner, Botox, which is used to smooth out wrinkles and treat migraines. Despite higher year-over-year sales, rival anti-wrinkle treatments like Evolus Inc.’sEOLS, +4.09%   Jeauveau, Nestlé SA’s NESN, -0.89%   Dysport and Merz Group’s Xeomin are entering the market, threatening Allergan’s market share in the space.

More recently, investors were rattled by the failure of Allergan’s depression drug rapastinel — considered by many to be the drugmaker’s next big blockbuster drug — in clinical trials earlier this year, leading the company to book a goodwill impairment of $2.47 billion in the first quarter.

Before Tuesday, Allergan was facing increasingly impatient calls from investors to take sweeping measures for change at the company, including splitting up the company and separating the roles of chairman and CEO.

“It looks as though the Allergan shareholders will finally be rewarded for their patience,” Marc Goodman of SVB Leerink wrote in a note to clients Tuesday. However, the $188-per-share price is too low, he wrote, adding that AbbVie should have paid at least $200 per share for Allergan. He wondered whether AbbVie was “opportunistically pursuing a wounded stock” — and if so, whether this means that other companies will pursue Allergan as well.

AbbVie has been under pressure to diversify its portfolio as its best-selling drug Humira faces increasing competition. The drug’s patent expired in Europe late last year, and it now faces biosimilar competition abroad from rival companies like Mylan NV MYL, +3.84%  and Amgen Inc. AMGN, -0.21%  Sales of Humira, which is used to treat a number of autoimmune conditions, fell in the first quarter to $4.446 billion, a 5.6% drop from a year ago.

“AbbVie’s acquisition of Allergan is as much about necessity as opportunity,” wrote Wilbur of Raymond James. AbbVie “faces a cliff, or more like a canyon, problem with the loss of Humira to biosimilars,” he wrote.

This acquisition gives AbbVie “new verticals to diversify away from Humira… and serve on as ‘bolt-on’ opportunities,” wrote Evercore ISI’s Josh Schimmer.