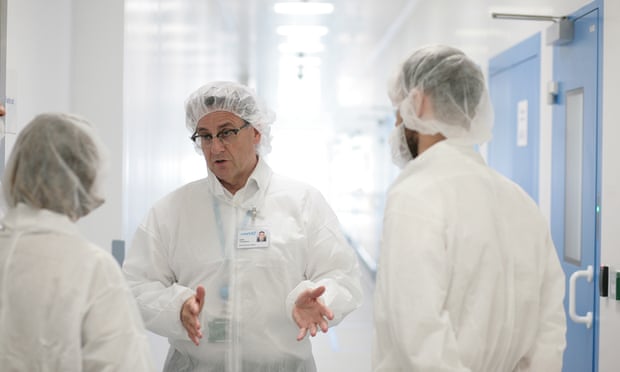 Biotech is one of the most promising parts of the British drug industry, not least according to the investors who continue to pump vast sums into the sector despite the looming shadow of Brexit. In the first eight months of 2018 alone it received nearly £1.6bn, compared with £1.2bn for the entirety of 2017.

An unassuming building in a science park near the Hertfordshire town of Stevenage is hosting four biotech firms that hope to achieve a major breakthrough for the field – and go some way to justifying that faith from investors.

The premise of biotech is radical: it harnesses living organisms to fight diseases. These firms – Adaptimmune, Cell Medica, Autolus and Freeline Therapeutics – are working on so-called living medicines, which use human cells and genes, to treat conditions ranging from hard-to-treat cancers to haemophilia and eye diseases.

They are based at a government-funded cell and gene manufacturing centre, which opened in May and is the largest such collaborative centre in the world. Cell and gene therapies can fix genetic defects and reengineer patients’ cells to recognise and attack tumours and other diseases.

There are more than 60 biotech firms specialising in cell and gene therapy in the UK, making it the second-biggest cluster in the world after the US.

In Stevenage, Adaptimmune, Cell Medica and Autolus all focus on cancer while Freeline is working on therapies for bleeding disorders. Another UK firm, London-based Nightstar Therapeutics, has a gene therapy in late-stage studies to treat a rare retinal disorder that leads to blindness.

Keith Thompson, the CEO of Cell and Gene Therapy Catapult (CGT), who set up the Stevenage centre, believes that turning cells and genes into living medicines can offer cures rather than just treating symptoms – and could be exported by Britain around the world. He describes it as “an absolute revolution”.

He is optimistic despite the looming threat of Brexit. “We’re trying to take the UK science into a new industry and not let it bleed offshore.”

Simon Pegg, the director at Adaptimmune, which is developing T-cell therapies for cancer, says the re-engineered cells start working straight away and cancer patients can see benefits within a week. In T-cell therapy, white blood cells called T-cells are taken from a patient. They are refrigerated and shipped to be reprogrammed to combat cancer cells, and then frozen under liquid nitrogen before being transported back to the clinical site for infusion into the patient.

However, there are challenges. Living therapies are expensive to make, resulting in a high price tag, and unlike traditional drugs cannot be stored in blister packs in a pharmacy.

Along with others, CGT is working hard to scale up the new therapies so they become routine treatments in Britain. The Stevenage centre will eventually be able to make 6,000 patient doses a year.

Three new government-funded treatment centres, where patients will receive cell and gene therapies, are also in the works – in the north, Manchester, and the Midlands and Wales.

There has been a string of positive news recently. In October, a stem cell gene therapy for severe inherited blood disorders that is being developed by London-based Orchard Therapeutics, a spinout from University College London, was given priority status by industry regulator the European Medicines Agency.

In September, NHS England said it would make Novartis’s gene therapy Kymriah available for children and young people with a form of leukaemia. Simon Stevens, the chief executive of NHS England, described the CAR-T therapy as a “true gamechanger”. It works by genetically engineering the patient’s own immune system’s “killer” T-cells to recognise and destroy cancer cells.

In 2012, six-year-old Emily Whitehead, who was seriously ill from an aggressive form of leukaemia, became the first child to be treated with the therapy. She is still cancer-free.

The industry has a long way to go – only a dozen cell and gene therapies are on the market in Europe, including Strimvelis, a gene therapy developed by GlaxoSmithKline for a severe immune deficiency known as “bubble boy” disease. However, there could be more soon, with 1,003 clinical trials of new therapies under way worldwide, half of them for cancer.

Asian Markets Slip on Fears of US Slowdown