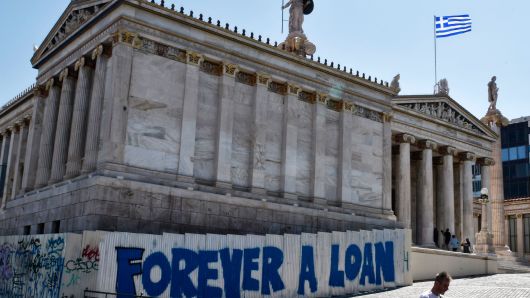 Market players will be looking for clues as to Greece’s economic plans when Athens unveils its draft budget for 2019 later Monday.

The budget is the country’s first in nearly a decade without being subject to a bailout program.

Greece ended a third financial rescue in August and has vowed to stick to stringent fiscal targets in the coming years in exchange for some debt relief. Athens has also pre-legislated reforms, including the country’s pension system, under that third bailout that are due to take effect in the coming years.

Markets are anxious to find out whether Prime Minister Alexis Tsipras’ government will stick to these targets, or if it will challenge them ahead of a general election in 2019.

Ricardo Garcia, a chief euro zone economist at UBS says “The Greek government is under huge pressure to allow for some fiscal easing as it tries to catch up in polls before the elections in 2019.”

The center-right and opposition party New Democracy has been leading opinion polls against the ruling anti-establishment party Syriza. In the latest poll, conducted on behalf of the Proto Thema newspaper, showed last month a 10.9 percent difference between the two parties.

Media reports have suggested that, since August, Tsipras is looking to cancel or postpone planned cuts in pensions, scheduled to start in January.

Nonetheless, potential changes to pensions, or to other reforms, could spark confrontations with European institutions and the International Monetary Fund (IMF). The IMF said last month that the 2019 pension cuts are part of the reforms that the Greek government agreed to, and that Greece needs to show it is investor-friendly.

Backsliding with reforms could also unsettle financial markets. Carsten Hesse, European economist at Berenberg, told that the market reaction will depend on how far the government goes.

Under the agreements with its creditors, Greece must achieve a primary budget surplus of 3.5 percent each year until 2022.

“The primary budget surplus has been better than expected over the last years, reaching 4.2 percent in 2017 versus a 1.75 percent demand by the official lenders,” Hesse from Berenberg said.

This has allowed the ruling Syriza party to make one-off payments of about 1.4 billion euros ($1.62 billion) to pensioners and other citizens hit by austerity last year.

Analysts told that expectations are that Greece will hit a budget surplus above 3.5 percent in 2018 too. But the government will only be able to be sure of that later in the year and more precisely at the start of 2019, when the final figures are released.

This means that reversing reforms, changing pension cuts or any other similar decision might have to wait until later.

Markets have been tracking developments in Italy, whose government announced Friday that it was increasing public spending in 2019 by three times as much as the previous cabinet had planned for.

The announcement led to a sell-off in Italian assets and an increase in government bond yields. However, these fears translated to Greek assets too.

The yield on the 10-year Greek bond rose from below 4.05 percent on Thursday to above 4.15 percent on Friday.

This move suggested that Greece is still vulnerable to outside developments and contagion risks, meaning that potential changes to its reforms could create further market turmoil.

Greece grew 1.4 percent in 2017 and it is expected to see a growth rate of 1.9 percent this year, according to forecasts from the European Commission.

The next financial crisis will be brought on by inadequate regulation, top economist says