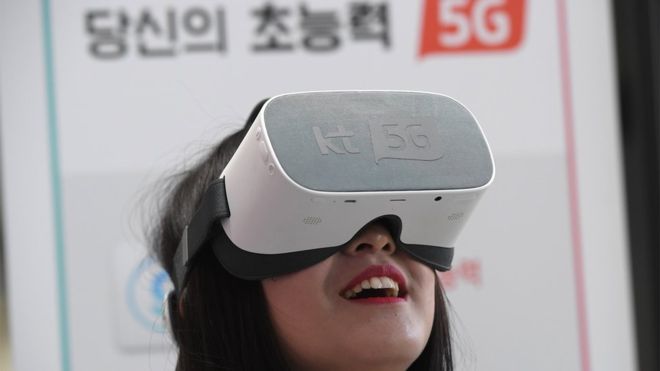 South Korea and the US have this week launched the world’s first commercial 5G services, promising a new wave of capabilities for smartphone users.

Samsung said its Galaxy S10 5G device will offer speeds up to 20 times faster than current phones as it began selling the handsets on Friday.

Countries are racing to build 5G networks that will be crucial for future tech such as driverless cars.

Nations are also working to resolve security concerns tied to the networks.

5G is the fifth-generation of mobile internet connectivity. Users will get more data faster, with less delay. It also promises wider coverage and more stable connections.

Ed Barton, chief television and entertainment analyst at Ovum, said the shift from today’s 4G networks to 5G will be significant.

“We’re expecting the leap from 4G to 5G to be a much greater leap than ever before.”

Part of the “leap” will come from the ability to move much greater volumes of data across networks. 5G will mean more devices can be connected to the network at better speeds.

Nikhil Batra, senior research manager at technology consultancy IDC Asia Pacific, said speeds will be 10 times faster than what is possible with 4G. Samsung said its 5G device will be up to 20 times faster.

What will 5G enable?

Initially, 5G will bring higher-quality streaming and the ability to livestream to bigger audiences – a better experience for people watching live sports or cloud gaming.

Ovum’s Mr Barton said down the track it will enable more augmented reality capabilities, such as better mapping apps and shopping experiences. 5G will be crucial for driverless cars.

The scope of possibilities is vast, from remote surgery to holographic video calls. Mr Barton said we don’t yet know what the “killer apps and use cases will be”.

“It’s a bit like no one predicted that ubiquitous smartphones with payments and location awareness would give rise to Uber,” he said.

Where is it available?

The technology is being piloted in trials all over the world but commercial applications are just becoming available.

DJ Koh, president of IT & mobile communications at Samsung Electronics said it has begun “a new era where the incredible speed and connectivity of 5G becomes a reality”.

Frost & Sullivan telecoms analyst Quah Mei Lee says South Korea and Japan have been leaders in 5G development. She said South Korea has always been strong in consumer applications but there’s “more than it can do” in 5G.

“We will see more applications coming to the market over the next three-to-six months.”

What about security concerns?

Much discussion about 5G infrastructure has centred around possible security risks, namely the participation of China’s Huawei.

Huawei, the world’s largest maker of telecoms equipment, has faced resistance from foreign governments over the risk that its technology could be used for espionage.

The US, Australia and New Zealand have all blocked local firms from using Huawei gear in 5G networks.

In principle, controlling the technology that sits at the heart of vital communications networks gives an operator like Huawei the capacity to conduct espionage or disrupt communications.

This becomes a bigger problem as more things – from autonomous vehicles to domestic appliances – become connected to the internet.

The US argues Huawei could use malicious software updates to spy on those using 5G, pointing to a Chinese law that says organisations must “support, co-operate with and collaborate in national intelligence work”.

Additionally, IDC’s Mr Batra said one of the fundamental differences between 4G and 5G networks is the ability for remote control which raises “potential security concerns”.

Mr Batra said with 4G, software and hardware were very tightly coupled. In 5G networks, hardware is separated from the software.

“That allows for remote control… of the network assets. All of these things can be managed virtually, and that makes it challenging in terms of security.”

Still, he said authorities around the world are working with operators to address these concerns and “we haven’t really seen any hard proof in terms of what is the issue”.