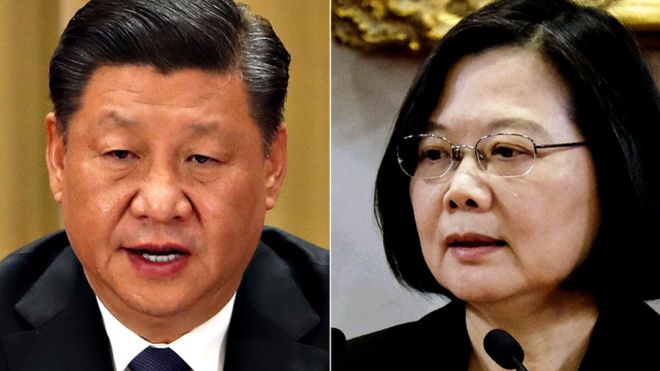 Chinese President Xi Jinping has urged the people of Taiwan to accept it “must and will be” reunited with China.

In a speech marking 40 years since the start of improving ties, he reiterated Beijing’s call for peaceful unification on a one-country-two-systems basis.

However, he also warned that China reserved the right to use force.

While Taiwan is self-governed and de facto independent, it has never formally declared independence from the mainland.

Beijing considers the island to be a breakaway province and Mr Xi’s comments are in line with China’s long-standing policy towards reunification.

But on Wednesday, Taiwan’s President Tsai Ing-wen said the island would never accept reunification with China under the terms offered by Beijing.

Under the “one country, two systems” formula, Taiwan would have the right to run its own affairs; a similar arrangement is used in Hong Kong.

Hong Kong has its own legal system, and rights including freedom of assembly and free speech are protected – however, there are widespread concerns in the territory that those freedoms are gradually being eroded.

In his speech on Wednesday, Mr Xi said both sides were part of the same Chinese family and that Taiwanese independence was “an adverse current from history and a dead end”.

Instead, unification was “an inevitable requirement for the great rejuvenation of the Chinese people”, he argued.

He also stressed that relations with Taiwan were “part of China’s domestic politics” and that “foreign interference is intolerable”.

Beijing “reserves the option of taking all necessary measures” against outside forces that interfere with peaceful reunification and Taiwanese separatist activities.

What is the view in Taiwan?

In a new year’s speech on Tuesday, Ms Tsai said China must use peaceful means to resolve its differences with Taiwan and respect its democratic values.

“I would like to call on China to face squarely the reality of the existence of the Republic of China on Taiwan,” Ms Tsai said, referring to the island’s formal name.

China should “respect the insistence of 23 million people on freedom and democracy, and must use peaceful, on parity means to handle our differences”, she added.

In November, Ms Tsai’s political party saw a heavy setback in regional elections perceived by Beijing as a blow to her separatist stance.

How serious is China’s threat?

The Chinese Communist Party has long spoken about unification as a matter of destiny.

But President Xi is arguably the most powerful leader since Mao – now unconstrained by presidential term limits – and one who has personalised, like no other, the project for “national rejuvenation”.

So should we pay more heed when the threat to retake Taiwan by force if necessary comes from his lips?

China may be a rising military superpower, but sending an invading army across the choppy, well-defended waters of the Taiwan strait would still be a huge military gamble, with success far from guaranteed.

Beyond the slightly more strident tone, Mr Xi’s speech does not appear to signal any dramatic change in those calculations, especially when you take into account the more conciliatory passages offering a further strengthening of trade links.

If there is to be any warfare, it is likely to be of the cyber kind; China is reported to be stepping up its efforts to influence Taiwan’s elections to hurt the prospects of independence-leaning parties and politicians.

The hope has long been that it will be China’s growing economic might, not military force, that will eventually pull Taiwan into its embrace.

Why is this so contentious?

Taiwan is a self-governed democracy and for all practical purposes has acted as an independent nation since 1949, when China’s nationalist government was defeated by communist forces and fled there from the mainland.

China however considers the island to be a breakaway province – not a country in its own right – which will one day be fully reunited with the mainland.

In recent years, Beijing has become increasingly assertive over its claims and what it says is a key question of national sovereignty.

China, for instance, insists that other countries can only have diplomatic ties with China or Taiwan, not both.

Beijing has won over more and more of Taipei’s few international allies to cut diplomatic ties with the island and establish relations with China instead.

Last year, it also forced foreign airlines and hotels to list Taiwan as part of China on their websites.

Trudeau’s environmental record on the line in Canada election year