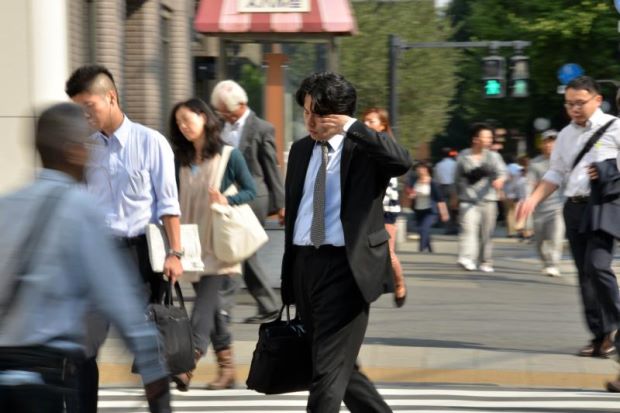 HONG KONG: Workers in the world’s richest countries are getting their biggest pay bump in a decade, a step toward solving a labor market puzzle that’s unnerving central bankers.

As shrinking unemployment in the U.S., Japan and euro zone finally forces companies to lift wages to retain and attract staff, JPMorgan Chase & Co. reckons pay growth in advanced economies hit 2.5 percent in the second quarter, the most since the eve of 2009’s worldwide recession. The bank predicts wages will accelerate 3 percent next year.

Fatter wallets should support global economic growth already enjoying its best upswing since 2011, while encouraging central banks such as the Federal Reserve to keep tightening monetary policy before inflation takes hold. It may prove less welcome news for stock and bond prices.

If sustained, the pickup in pay will settle a debate over whether the historical relationship between tightening labor markets and rising wages had broken down even as unemployment in developed economies fell to its lowest since 1980 by JPMorgan’s estimation.

Reasons to doubt the reliability of the Phillips Curve, an economic model created in the 1960s, include the assimilation of China and India into the global workforce, greater automation, retiring baby boomers being replaced by lower-paid workers, low productivity, companies increasingly dominating industries and declining labor-union membership.

By suppressing pay, such forces have been identified as driving the rise of populism at the ballot box as voters embraced President Donald Trump and Brexit in the hope they would spur prosperity.

”At some stage the Phillips Curve should reassert itself as the labor market continues to tighten in much of the developed world,” said Megan Greene, chief economist at Manulife Asset Management.

There are fresh signs employees are already doing better. Average hourly earnings for private American workers climbed 2.9 percent over the year in August, the most since the recession ended in mid-2009. Flowers Foods Inc., a Thomasville, Georgia-based maker of packaged bakery products, is among the companies reporting higher employee costs as the U.S. jobless rate sits near the lowest since the 1960s.

“We are seeing both higher wages and increased turnover, which has contributed to higher manufacturing workforce-related cost,’’ Steve Kinsey, chief financial officer at Flowers Foods, told investors on Aug. 9.

In Japan, cash earnings rose 1.5 percent in July from a year ago and 3.3 percent in June. Again, companies are feeling a pinch. Toyota Motor Corp., the country’s biggest manufacturer, said in March that its pay raises this year top the 3 percent increase of 2017 and a 2.4 percent bump in 2016.

The key question is how sustainable the recent gains will be. Even if pay growth does continue, any accompanying rise in inflation will eat into the ability of consumers to spend by pressuring so-called real wages.

One reason to expect pay to stay weak is that companies are increasingly offering more flexible working arrangements, longer vacations and better benefits instead of higher wages. A recent survey by Bank of America Corp. found that younger workers and women in particular place greater importance on non-monetary “lifestyle” benefits than their counterparts.

Some economists are confident that wages will extend their best run in a decade.

Those at Citigroup argue earnings are now outpacing the rate of overall gross domestic product growth in several advanced economies and predict they will keep rising faster than inflation as productivity picks up and firms absorb some of the higher labor costs. That’s what happened in the last two U.S. expansions, they said in a new report.

Meantime, Andrew Cates and Robert Dent, economists at Nomura Holdings Inc., wrote in a report last month that many of the trends which undermined pay are now reversing course as the working age population declines and governments pursue protectionism.

For financial markets, that means lower levels of corporate profitability and higher inflation, weighing on both equities and bonds, they said. The S&P 500 Index, for example, fell on Sept. 7 after the U.S. reported the latest uptick in wages.

“If negative structural forces are the key driver behind rising wages, we could see a scenario where both equities and bonds under-perform,” said Cates and Dent. “This would be a surprise for market participants.”