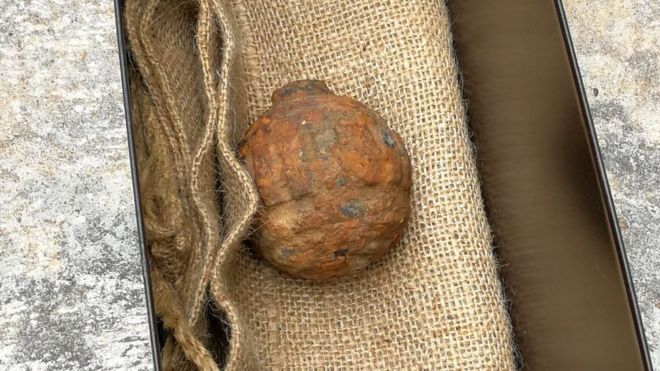 A World War One-era German hand grenade has been found among a delivery of potatoes shipped from France to a crisp factory in Hong Kong, police say.

The muddy device, which was 3in (8cm) wide, was “in an unstable condition” because it had been discharged but had failed to detonate, officials said.

It was discovered at the Calbee crisp-making factory in the eastern Sai Kung district on Saturday morning.

The bombe de terre was safely detonated on site by bomb disposal officers.

“All the information to date suggests that the grenade was imported from France together with the other potatoes,” Superintendant Wong Ho-hon told reporters.

He added that the device was defused using a “high-pressure water firing technique”.

It is believed to have been dug up accidentally with potatoes planted in a field in France before being exported.

“The grenade was likely to have been left behind, dropped by soldiers there during the war, or left there after it was thrown,” Dave Macri, a military historian, told the South China Morning Post.

It was the second to be found in Hong Kong within the same week.