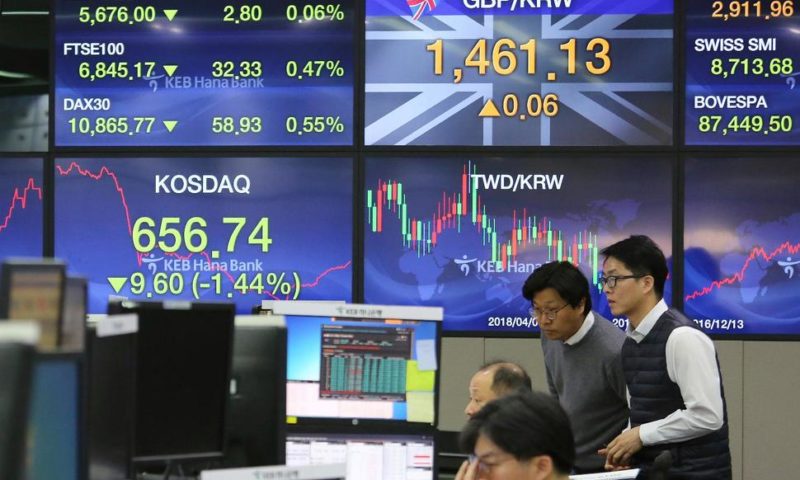 SINGAPORE — World markets were mixed on Monday as British Prime Minister Theresa May prepares to address the House of Commons over a messy exit deal. Most Asian indexes rose on hopes that the Federal Reserve would re-evaluate its hawkish stance at a meeting later this week, following signs of slower global growth.

BREXIT TENSIONS: May’s address comes after the European Union rebuffed her request to sweeten a divorce agreement that has been widely criticized at home. She will likely quash suggestions that the government is planning a second referendum on whether to leave the bloc. Her supporters have said that another Brexit vote would exacerbate divisions in the U.K. Britain is scheduled to leave the EU on March 29 and leaving without a deal could plunge the country into its deepest recession in nearly a century, its central bank has warned.

FED MEETING: The Federal Open Market Committee is expected to raise its short-term interest rate — a benchmark for many consumer and business loans — by a modest quarter-point to a range of 2.25 percent to 2.5 percent after a meeting on Wednesday. This would be its ninth hike since late 2015. The central bank forecasts three more rate hikes in 2019, but softer global growth could cause a shift in its hawkish stance. Last week, China announced that its industrial output and retail sales had slowed in November. France, which is racked by protests, reported that its purchasing managers’ index fell to a level pointing toward economic contraction. Germany’s reading, that still reflected growth, fell to a four-year low.

ANALYST’S TAKE: “The ‘Santa rally’ which had been hoped for has proven to be frustratingly elusive, and now markets are quite happy, if not desperate, for at least a dovish line to be thrown by the FOMC,” Vishnu Varathan of Mizuho Bank said in a market commentary. Markets are “grasping straws led by hopes that there will be a material dial back of hawkish bias,” he added.

ENERGY: Benchmark U.S. crude added 4 cents to $51.24 a barrel in electronic trading on the New York Mercantile Exchange. The contract dropped $1.38 to settle at $51.20 in New York on Friday. Brent crude, used to price international oils, gained 1 cent to $60.29 a barrel.

Nissan Board Meets but No Chairman Picked to Replace Ghosn