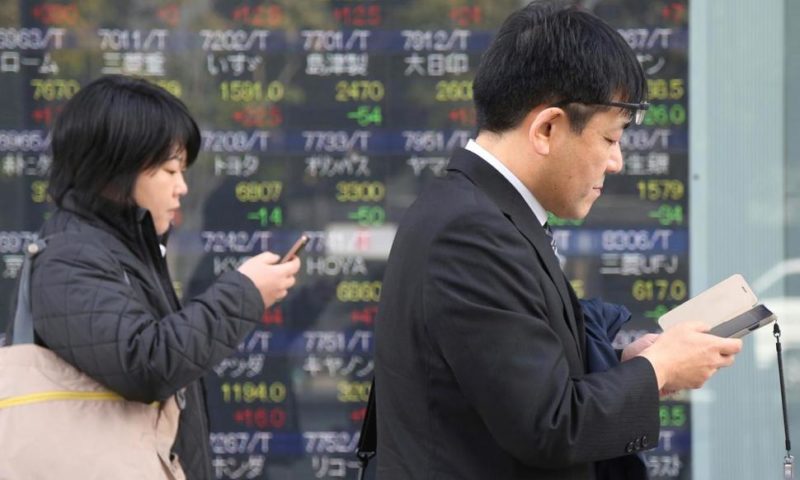 World markets mostly are up on hopes for an easing in the U.S.-China trade war, an interim deal on Brexit, and as the volatile price of oil stabilized.

SINGAPORE — World markets mostly rose on Monday on hopes for an easing in the U.S.-China trade war, an interim deal on Brexit, and a stabilization in the volatile price of oil.

KEEPING SCORE: In Europe, Germany’s DAX index was 1.3 percent higher at 11,336 and France’s CAC 40 rallied 1.1 percent to 5,000. Britain’s FTSE 100 index was up 0.9 percent at 7,016 after the country’s government agreed on a Brexit deal with the EU, though it could yet be voted down by the British parliament in two weeks.

BREXIT DEAL: The European Union and Britain finally sealed an agreement governing the country’s departure from the bloc on March 29. This comes after months of stop-and-start negotiations and resignations. British Prime Minister Theresa May must now get her divided Parliament to back the deal, which leaves Britain subject to rules of the bloc at least until the end of 2020, but avoids the worst-case scenario for businesses of a sudden return of tariffs and customs checks. May is facing opposition from both pro-Brexit and pro-EU camps.

ANALYST’S TAKE: Traders may be celebrating too soon, Chris Weston of Pepperstone Group Limited said in a market commentary. “As things stand, the numbers just aren’t there (in parliament),” he said. “A deal is likely to be voted down.”

TRUMP-XI MEETING: Sentiment was also lifted by hopes that President Donald Trump and his Chinese counterpart Xi Jinping will unwind a blistering trade dispute this week. The leaders are scheduled to meet at the Group of 20 summit in Buenos Aires. Topping the agenda is a trade dispute over Beijing’s technology policy, which has caused the U.S. and China to impose tariffs on billions of dollars of each other’s goods. Chang Wei Liang of Mizuho Bank said that “an agreement for talks over dinner suggests a higher level of engagement, which could result in a gentlemen’s agreement not to escalate tariffs further.”

A $20 billion plan that includes the LA Dodgers is said to be aimed at stabilizing big insurers: WSJ