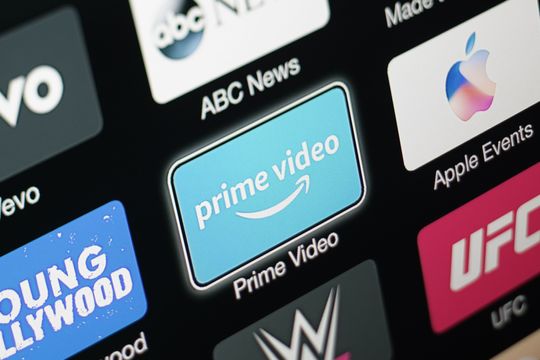 `For a decade, FANG stocks have been the right place to be in both good markets and bad,’ said George Ball, chairman of Sanders Morris Harris, referring to the group of most prominent U.S. tech companies. ‘That has changed now.’

Rising inflation-adjusted yields in the U.S. are undermining the long-running trade in which investors favor stocks over other asset classes, and are poised to hit the technology sector even harder.

That trade — known as “TINA,” an acronym for “There Is No Alternative” to equities — is being increasingly tested by real yields, which have risen from below zero on expectations of aggressively higher interest rates by the Federal Reserve. Five-, 10- and 30-year inflation-adjusted yields are at their highest or least negative levels of roughly the past two years, according to Tradeweb.

Real yields matter because they’re seen as the true cost of capital for corporations, after factoring in inflation.

When they’re rising, real yields are bad for investors in stocks and other risky or speculative assets because the price distortions that enabled them to benefit from the Fed’s easy-money stance since March 2020 are going away. The cost of borrowing money goes up — making it more expensive for technology companies to undertake development. In addition, the discount rate, or rate of return investors demand to discount future cash flows back to present value, is also increasing.

“We wouldn’t be shocked if we broke 4,000 on the S&P 500 between now and summer,” said Lisa Shalett, chief investment officer and head of the global investment office at Morgan Stanley Wealth Management in New York. “A lot of that is going to be catalyzed by people not just talking about higher interest rates, but living with higher interest rates,” she told MarketWatch.

The chart below shows how much inflation-adjusted stock valuations had already plunged before 2022, according to Morgan Stanley Wealth Management, which manages $4.8 trillion. Though Treasury yields have soared and inflation is running at a 40-year high, the price/earnings ratio on the S&P 500 and Nasdaq Composite have barely budged, the firm said. This implies that, when adjusted for inflation, the earnings yield on stocks — or, earnings per share divided by current share prices — has never been lower. 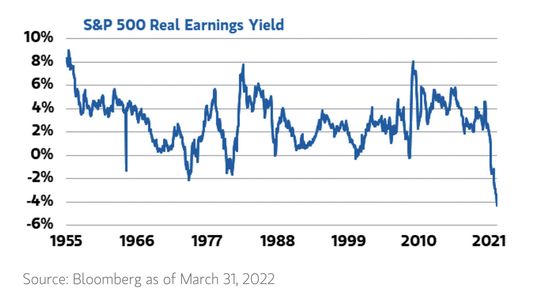 “Academia suggests rising real yields should be hitting all stocks equally, but the problem is that it hasn’t,” Shalett said via phone. “Unfortunately, the correction hasn’t come across mega-cap tech companies, which have multiples that people see as Teflon. We don’t think that view is warranted. We think mega-cap could fall another 10-15% while indices fall another 5%.”

In a note this week, Shalett wrote that Morgan Stanley Wealth Management’s global investment committee disagrees with the “there is no alternative,’ or ‘TINA’ argument that U.S. stocks must be preferred in a diversified portfolio because they are the only alternative to bonds and to other regional equity allocations.” The committee sees better opportunities in non-U.S. stocks for the next 12 months.

Simply put, when real yields, as measured by the rates on Treasury inflation-protected securities, are negative, it’s a sign that the Fed is still technically in an accommodative stance: So even if stocks do sell off, plenty of investors will look to buy the dip. But as real rates turn more positive, financial markets become increasingly volatile as traders and investors adapt to an environment of tighter conditions and a shift away from super-loose monetary policy.

A model produced by Quant Insight, which uses artificial intelligence and machine learning to analyze more than 6,000 securities across asset classes, showed that “macro conditions are getting worse for equities relative to bonds” — a turnabout since March, according to Huw Roberts, the firm’s London-based head of analytics. “The consolation is that, to some degree, SPY (or, SPDR S&P 500 ETF Trust) SPY, -3.70% has already priced in some of the bad news,” Roberts wrote in an email.

During 2022’s substantial run-up in yields, market-based rates periodically went down — and, during those times, FANG stocks tended to go up. Over the past few weeks, however, FANG companies have underperformed even when rates moved lower, underscoring a shift in sentiment by investors, according to George Ball, chairman of Sanders Morris Harris, a Houston-based investment firm which manages $4.9 billion.

“We would avoid FANG stocks,” Ball told MarketWatch via phone.

“For a decade, FANG stocks have been the right place to be in both good markets and bad,” he said. “And until last week, people were willing to overlook high valuations and business-model risks in FANGs. That has changed now.”

Ball’s firm began scaling back on the 15% to 20% exposure it had to FANG stocks, either directly or through indexes, six months ago, and is no longer looking to add them, he said. There is also an outside risk that the Nasdaq Composite could fall as much as 10% to 12% from current levels by this fall, Ball said.

Read: The 10-year Treasury real yield briefly went above zero. Here’s what it means for markets.

The highlight of the coming week’s calendar is Wednesday’s policy decision from the Fed, followed by a press conference by Chairman Jerome Powell.

John Madziyire, a senior portfolio manager and the head of U.S. Treasurys/TIPS in Vanguard Group ‘s fixed-income group, said he struggles to see the Fed “moving the dial” — or doing more than delivering a 50 basis point rate increase and initiating the process of reducing the central bank’s almost $9 trillion balance sheet — on Wednesday.

However, any suggestion that a 75 basis point move might be in the cards would jolt front-end yields as well as real rates, the Malvern, Pennsylvania-based portfolio manager says. Markets are currently positioned for two more half-point hikes in June and July, he said in a phone interview.

The next day’s releases are ADP’s employment report, the final reading of S&P Global’s U.S. services PMI, the ISM services index, and data on the international trade balance.

Foreclosure filings are up 132% from a year prior. Here’s what that means for the housing market (and it’s not what you might think)