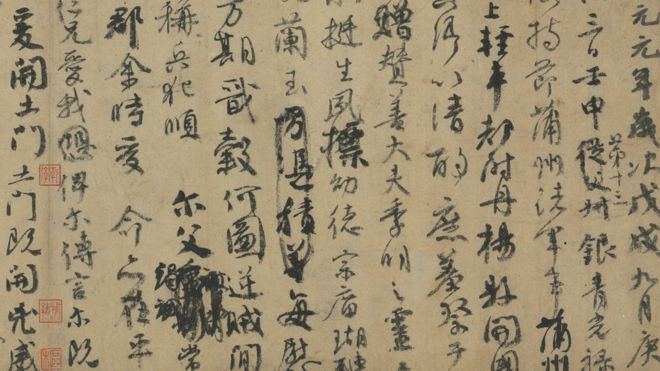 A decision by Taiwan’s National Palace Museum to lend a rare calligraphy to Japan’s Tokyo National Museum has sparked outrage across China.

On paper it seemed like a straightforward cultural exchange, so why has this prized masterpiece created 1,200 years ago caused so much anger today?

A household name in China

The calligraphy, titled Requiem to My Nephew, was painted by Yan Zhenqing – considered to be one of the greatest calligraphers in China. He lived between 709 to 785 AD.

Yan Zhenqing wrote the piece in 759 AD, after he found that his nephew had died.

“When you’re young and you study Chinese art, you’ll learn [about him].”

Mr Tong said the piece of work was a draft by Yan Zhenqing, and so carried markings and scribbles written by the author, making it even more prized. The final piece has long been lost.

The artwork was preserved in China for centuries until it was taken to Taiwan in the 1940s – along with other Chinese antiquities – when Chinese nationalists defeated by communist forces fled to the island.

It’s been since kept securely in Taiwan’s National Palace Museum – this is only the second time the work has been loaned overseas.

It was lent in 1997 to the National Gallery of Art in Washington DC, but has remained in Taiwan ever since.

The work is now being displayed in Tokyo as part of an exhibition titled “Unrivalled Calligraphy: Yan Zhengqing and His Legacy”.

The museum says Yan “reflected the changing consciousness of the times to brilliant effect in his calligraphy” and that the piece in question is “infused with grief”.

News of the loan shocked many users on Chinese social media site Weibo, many of whom reacted with anger.

As of Tuesday, the hashtag “Requiem to My Nephew” has been read more than 260 million times on Weibo. Many people mentioned Japan and China’s wartime history and the Japanese occupation, which remain raw subjects in China.

“Has Taiwan forgotten what Japan did to us? Do they know what the Nanjing massacre is?” said one user on Weibo, referencing one hugely sensitive issue.

In 1937, Japanese troops invaded the eastern city of Nanjing. China says more than 300,000 of its people were massacred – while some Japanese nationalists deny any killings took place.

“This is humiliating. This piece represents the heart and soul of China… and they are sending it to Japan. This is an insult to our ancestors,” said another.

Others expressed more anger towards Taiwan.

“Taiwan would rather loan our national treasure to Japan rather than give it back to us. Taiwan is crazy,” another added.

Social media in China is heavily controlled. Comments on sensitive issues are often censored, and conversely, comments on issues that align with government policy are often used to its advantage.

Chinese state media outlet the Global Times did not directly address any political concerns, but instead spoke to an expert who said that the relic was “in jeopardy while being transported”, saying that sunlight would harm the ancient paper.

A statement released by the National Palace Museum stated that the item was “stable and suitable for overseas exhibitions”.

It’s clear that a lot of the anger is political.

“Japan’s very brutal invasion of several parts of China during the 1930-40s still elicit very bad memories in China. Part of this is mainly due to the fact that the Chinese side has continually stressed this memory,” said Prof Ian Chong of the National University of Singapore.

“The fact that this work – that I suppose many in China are attached [to] – is going to Japan [is why] you see a lot of this angst being demonstrated.”

Taiwan is a self-governed democracy and for all practical purposes has acted as an independent nation since 1949.

China however considers the island to be a breakaway province which will one day be fully reunited with the mainland.

Earlier this month, Chinese President Xi Jinping had urged Taiwan to accept that it “must and will be” reunited with China.

He also warned that China reserved the right to use force, causing Taiwan’s President Tsai Ing-wen to say that the island would “never” accept reunification under the terms offered by Beijing.

“The recent effort by Xi insisting on reunification has also sort of heightened tensions,” said Dr Chong. “The loan of this artwork, which seems like a straightforward issue, has kind of found itself wrapped up in the middle of this.”

According to the Global Times, Chinese law also does not allow “valuable cultural relics, especially paintings and calligraphy” to leave the country.

The loan, says Dr Chong, could then also be interpreted as another move by Taiwan to show that it “doesn’t abide by [Chinese] laws.”

“So you have all these layers, what is Taiwan’s place in relation to China, the Sino-Japanese tensions, all these sore points. And all it takes is a random spark to reignite everything.”

New atom smasher would be world’s biggest by far