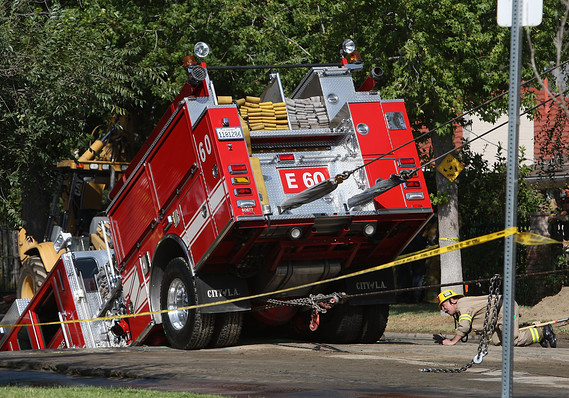 The U.S. economy has taken a turn for the worse — and it doesn’t look as if things will get much better anytime soon.

A mountain of evidence in the past two weeks shows that key segments of the economy have slackened. Retail sales fell last month, business investment nearly dried up and manufacturers are growing at the slowest pace in nine years.

Don’t expect much good news in a holiday-abbreviated week. The trade deficit is likely to widen, consumer confidence could decline and household spending was probably tepid in April.

“Call it scare-mongering if you like, but many of the data releases [last] week had the unmistakable whiff of a recession,” said chief U.S. economist Paul Ashworth of Capital Economics.

Mind you, Ashworth is not predicting the sudden onset of recession. Nor are other economists.

Yet they all point out the obvious: The trade spat between the two largest countries in the world, the U.S. and China, is hurting the economies of both — not to mention the rest of the world.

The spillover is evident not just in updates on the economy, it’s also infecting stocks. After topping 26,500 at the end of April, the Dow Jones Industrial Average DJIA, +0.37% has lost about 1,000 points. And stocks are unlikely to make much headway as long as the dispute drags on.

What’s keeping the economy afloat despite trade and other headwinds?

The strong labor market, for one thing. Layoffs and unemployment remain near a 50-year low, and even if companies aren’t hiring as rapidly as they were last fall, they aren’t resorting to mass job cuts, either.

“The U.S. still has a rock solid labor market,” said chief economist Scott Anderson of Bank of the West.

The Federal Reserve, for its part, cast aside plans to keep raising interest rates this year. The result has been a sharp decline in the cost of borrowing for new cars, new homes and other consumer and business loans.

Still, most economists say that won’t be enough to keep the U.S. from slipping below 2% growth in the second quarter. They also expect the initial 3.2% reading for first-quarter gross domestic product to be trimmed to 3% or less.

What remains to be seen is how much the mounting problems in the U.S. economy reshape trade talks with China.

“The strength of the US economy in the first quarter was presumably one of the factors that emboldened President Donald Trump to take a tougher line with China in the trade dispute,” Ashworth contended. But the incoming data “would leave Trump in a more vulnerable position.”