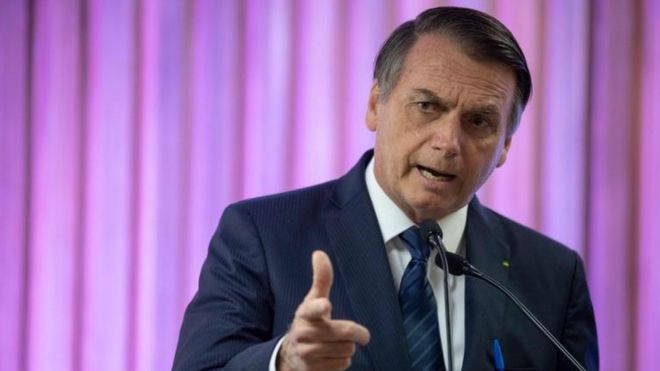 On 1 January, when Brazil’s far-right president Jair Bolsonaro took office, many in the country were concerned that the divisive politician would not be able to bring the country together.

But one sector was almost unanimous in praising Mr Bolsonaro’s rise to power: business people.

Brazil’s president boasted during the election that he did not understand anything about economics.

Once in power, he delegated all decisions on the subject to businessman Paulo Guedes, who became a “super-minister” of the economy.

The task of rescuing Brazil’s economy from the brink of yet another recession was urgent. The economy is still at the same level it was back in 2014.

Markets were excited at the prospects of liberal reforms to come.

But expectations soon started to fall apart. A series of government blunders – political infighting inside the administration, a clumsy attempt at state intervention in Brazil’s fuel policy and the lack of leadership in Congress – hampered growth expectations.

Most analysts have halved their growth expectations for Brazil and now believe significant growth will not start until 2020.

Here is a look at some of the key figures that suggest Brazil’s economy is not moving forward.

1. There’s no economic recovery in sight

In the previous decade, Brazil was lauded (along with Russia, India, China and South Africa) as one of the Brics powers – emerging economies with superfast rates of economic growth that would surpass developed economies by 2050.

The economic performance of this decade, however, suggests Brazil does not belong in that league.

A crippling two-year recession in 2015 and 2016 saw the country’s economy contract by almost 7%.

And there is still more bad news: since the beginning of the year, economists have more than halved their expectations of economic growth for 2019 to a rate not very different from that seen in the past two years.

2. The unemployment problem isn’t being solved

Brazilian workers are the ones paying the price.

The number of unemployed people has increased from 7.6 million in 2012 to 13.4 million this year.

Mr Bolsonaro thinks these numbers actually underestimate the real picture. He believes the situation is worse.

The official unemployment survey shows that 28.3 million people are under-utilised – which means they are either not working or working less than they could.

There are fewer people with formal jobs, while wages are barely keeping up with inflation – which has been brutal. Since the beginning of Brazil’s recession four years ago, prices have gone up by 25%.

3. The currency and stock market have dashed post-election hopes

During much of the election, the Brazil’s currency – the real – rallied strongly as it became clear that Mr Bolsonaro would win the election.

It was a clear sign of confidence from investors abroad.

Both the stock exchange and the currency – which usually anticipate the pace in the real economy – are close to the same level they were at the beginning of this year.

Brazil’s stock exchange hit an all-time high in March this year, but has returned most of its gains following disappointing corporate results.

So why is Brazil in such a mess in the first place?

The main consensus among market analysts – and also people in Mr Bolsonaro’s government – is that the country started spending too much money around 2013, during the leftist government of Dilma Rousseff.

Since then, one of the main thermometers of Brazil’s economy has been the fiscal deficit – the amount of money spent beyond the country’s revenues.

Ms Rousseff was impeached amid allegations that she masked Brazil’s fiscal deficit to hide how much her government was overspending.

Since her downfall, all efforts from the government have gone into lowering this fiscal deficit.

Some economists say the main culprit is the pension system, with Brazilians retiring too early (some in their early 50s) and with too many benefits (especially amongst civil servants).

Mr Bolsonaro is proposing pension cuts and a minimal retirement age of 65 for men and 62 for women.

During the boom years, Brazil had a debt which was 51% the size of its economy.

The growing fiscal deficit raised the debt level to 77.1%.

The government says that if nothing is done, the country’s debt will be the size of its entire economy by 2023.

Albino panda caught on camera in China in world first