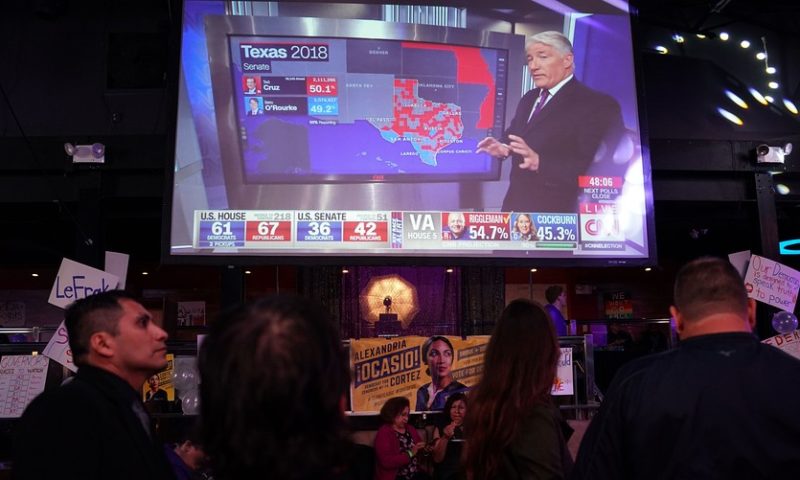 The midterm elections delivered a split decision on Congress, as expected, with results still trickling in early Wednesday.

The Democrats grabbed a hold of a majority in the House for the first time since 2010, while the GOP retained control of the Senate, in what many has characterized as a vote that was a referendum on President Donald Trump’s first two years in office.

As it stands, the outcome would suggest that the president will encounter more challenge to his legislative powers in the final stretch of his first time in the Oval Office, as he faces headwinds to enacting, or expanding, economic policies, including increased spending and further tax cuts, that his administration has deemed as boosts to markets and the economy.

It isn’t clear how shifts in the political landscape will alter the Trump agenda or how investors will interpret the newly cast framework on the Hill, but the resulting gridlock in Washington may be a boon for bulls:

Trump hailed the midterm elections in an early morning tweet as a big victory: 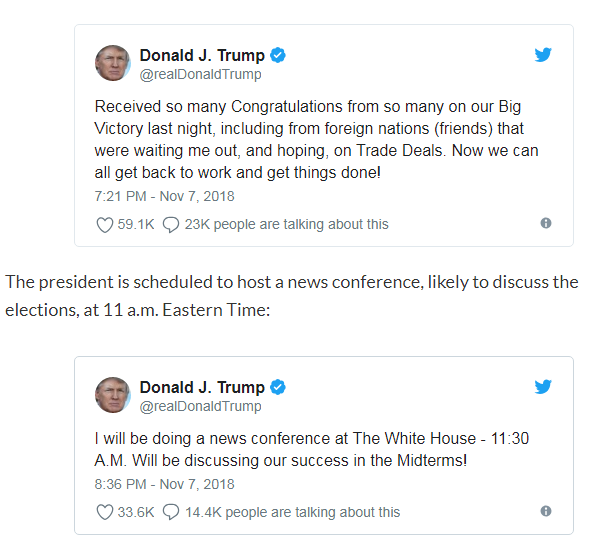 What strategists were saying

“In a dispassionate way the equity markets probably got the outcome they wanted. The concern that an emboldened Republican party retaining both houses might have embraced another round of tax cuts, thereby increasing the deficit, has receded. Meanwhile, the worry was that if the Democrats had won back both houses, the tax cuts and regulatory changes might have been rolled back or rescinded,” wrote Sean Darby, chief global strategist at Jefferies, in an early Wednesday research report.

“A weaker Dollar is, at least for now, the only sign that something has changed in the financial markets after the US mid-term elections. The Greenback is currently down against all other major currencies. It is widely assumed that a split congress will stand in the way of some of President Trump’s plans, like the deficit aggravating fiscal stimulus 2.0. As the prospects of a new sugar rush for the American economy fade, so does the Dollar strength,” wrote Ricardo Evangelista, senior analyst at ActivTrades in a Wednesday note, referring to corporate tax cuts enacted in late 2017.

“The US dollar index has sold-off as the Democrats are set to take control of the House of Representatives, and the Republicans will retain control of the Senate. The greenback declined as traders feel life for President Trump will be tricky seeing a congress is divided. Given the success of the Democrats, the chances of additional tax cuts from Mr. Trump have decreased,” wrote David Madden, market analyst at CMC Markets.
STOCKS:

Some market strategists anticipated that Wednesday would result in stronger gains in the days following the vote, with the gridlock tending to be followed by gains in equity markets in the following days, week and months:

“Bullish- No change- Additional gains likely following the mid-term elections based purely on price action alone (without viewing poll results) Upside targets lie near 2782 and then 2791. Buy dips at 2730 and under near key support at 2707-10,” wrote Mark Newton, founder of market research firm Newton Advisors on Wednesday.

Bond traders may view a split Congress as bullish for Treasury prices, which move inversely to yields. Fixed-income investors are expecting that Democrats will undercut prospects for further tax cuts or other measures that would further increase budget deficits that have raised hackles among bond investors because they increase debt supplies.

“While we might see further volatility throughout the day, it now appears clear that the medium-term impact for bond markets is likely to be rather modest because the election results will 1. hardly change an environment in which growth is losing momentum, 2. not affect the Fed’s gradual tightening cycle and 3. not change the president’s trade dispute with China,” analysts at UniCredit in an early Wednesday report.

“Treasuries close firmer as the dollar drops. Real money and Asia bank buying of 5yr and 10yrs. Stocks largely gain as the Democrats gain seats in the House there was no “blue wave” and unlikely to restrict current trade policy,” Tom di Galoma, managing director of Treasurys trading at Seaport Global Securities.

Trump has been critical of the Fed Chairman Jerome Powell, who has been endorsing a path toward normalizing interest-rate policy from crisis-era levels. Some market participants fear that in the face of a split congress, Trump will use the Fed as a possible scape goat, if the economy starts to show cracks. He already has already adopted a decidedly critical tone toward Powell. The Fed is slated to commence a two-day policy meeting Wednesday, with an updated statement from the central bank slated for Thursday at 2 p.m. ET.

A split in Washington may force the Trump administration to soften his hard-line stance on countries like Iran, with the president already showing some softening in sanctions against Iranian exports after the U.S. granted waivers to allow eight nations to continue buying Iranian crude despite U.S.-driven economic sanctions against the Islamic Republic. Some energy investors were also predicting increased regulation in the sector with a Democratic House.

On Wednesday, U.S. benchmark crude-oil prices were headed firmly higher after a stretch of weakness. WTI crude for December was up 1.1% at $62.89 a barrel early Wednesday, while January Brent oil LCOF9, +1.01% the international benchmark, was rising 1.6% at $73.30 a barrel.

“They also made that prediction before Democrats won the US House of Representatives and who is already talking about more tax and regulation on energy thereby thwarting US energy production progress. This is just what the shale oil producers need as they still try to take in more money than they spend when they produce a barrel of oil,” wrote Phil Flynn, senior market analyst at Price Futures Group.