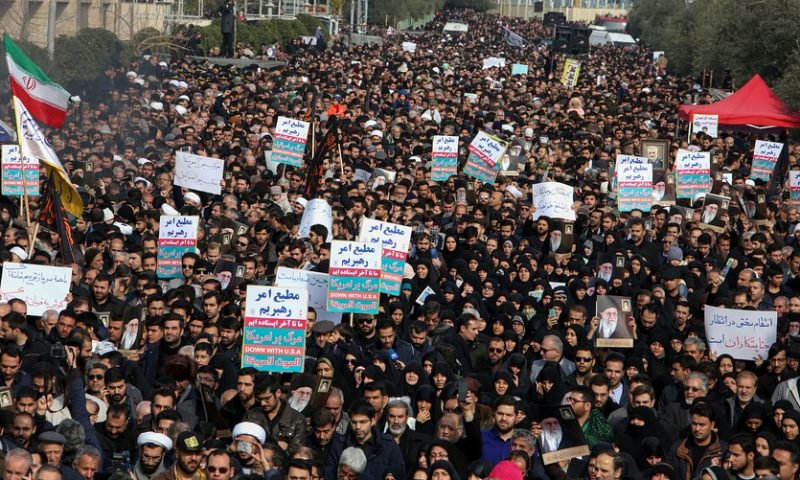 Consider it a wake-up call.

Oil prices jumped Friday, while investors dumped equities and piled into haven assets like gold and Treasurys in a knee-jerk reaction to a U.S. airstrike in Baghdad that killed a top Iranian military commander. Tehran vowed to retaliate — and most observers expect them to follow through.

Here’s what market participants should keep in mind:

Things could get choppy

“We came into this year calling for a continuation of the equity bull market, but with a single-digit return profile and elevated volatility,” said David Donabedian, chief investment officer at CIBC Private Wealth Management, in an interview.

And with the U.S.-Iran conflict unlikely to be a “one-and-done” event, the effect on oil and other markets is unlikely fade quickly as it did in September after an attack on Saudi Arabia’s oil infrastructure that was widely blamed on Iran, he said.

“This time will likely be no different. We expect that uncertainty may persist in the near term as markets await potential retaliation from Iran and disruption in the global oil markets,” he wrote.

Stocks ended 2019 on a tear, with major U.S. indexes logging a series of records in December and following through with another set of records on the first trading day of 2020 on Thursday.

Friday’s decline didn’t even erase Thursday’s gains, but even bullish analysts warned that overbought conditions and expectations Iran will indeed retaliate leave scope for a pullback and increased volatility.

The 2019 stock market rally wasn’t confined to the U.S., with the MSCI World Index rising 12% since early October, said analysts at ING, in a Friday note.

“ And the big rally in risk assets in December certainly looked like a play on the 2020 story – benign conditions, a trade truce and more money printing in G3 economies. Were events in the Middle East to escalate severely, overweight positioning in risk assets could easily trigger a 7%-10% correction in global equity markets,” they wrote.

Not your father’s oil shock

Middle East tensions mean worries over the threat to the world’s oil supply. And while a wider conflict with Iran could create havoc, the potential economic pinch isn’t the same as it was in past decades.

“Our reliance on fossil fuels to generate economic growth has come down substantially over the years. It’s not the ‘70s,” Donabedian said.

It would take a “significant and sustained” jump in oil prices — for example, West Texas Intermediate crude trading above $75 a barrel for an extended period — to begin to raise serious questions about the sustainability of the economic recovery, he said.

In addition, the U.S., thanks to the shale boom, is now a global oil exporter. The growth of the domestic fossil-fuel industry means that higher oil prices are less of a drag on the U.S. economy.

But while that should mean higher oil prices would depress economic growth, recent experience suggests otherwise. That’s because in the shale area, oil-sector capital expenditures are “acutely sensitive” to prices, even in the short term, he said, in a note.

“When oil prices collapsed between spring 2014 and early 2016, the ensuing plunge in capital spending in the oil sector outweighed the boost to consumers’ real income from cheaper gasoline and heating oil, and overall economic growth slowed markedly,” he said. “This story played out in reverse when oil prices rebounded in the three years through spring 2018, and economic growth picked up even as consumers’ real incomes were hit.”

While analysts see scope for volatility and a near-term pullback, so far events haven’t been enough to turn bulls into bears.

“Historically, regional geopolitical happenings are not the events that end business and market cycles,” said Invesco’s Levitt, noting that market returns, on average, have been positive 12 months after spikes in economic uncertainty, as measured by a widely followed index (see chart below).

“The larger market narrative of slow growth, benign inflation globally, generally accommodative monetary policy globally, and equities still attractive relative to bonds, has not changed. In our opinion, the backdrop for equities and other risk assets remains favorable,” he said.

In addition to events in the Middle East, investors will also work through a busy economic calendar in the week ahead. The main event comes Friday, with the December U.S. jobs report.

Economists surveyed by MarketWatch expect the U.S. economy created 155,000 new jobs last month, down from 266,000 in November. The unemployment rate is expected to remain unchanged at 3.5%.

Stocks could see a double-digit drop in the coming months, warns Wells Fargo