For the first time in four weeks, stocks ended higher although most of the week’s gains were relinquished before the close of trading on Friday. While encouraging economic reports prompted some buying interest, the data suggested that inflation was not slowing enough to satisfy the policymakers in the Federal Reserve. Only the utilities sector ended down for the week. The Dow Jones Industrial Average (DJIA) ended 1.99% up while the total stock market gained 1.66%. The S&P 500 Index rose by 1.51% while by Nasdaq Stock Market Composite inched up 0.73%. The NYSE Composite ascended 2.42%. The CBOE Volatility Index slid down by 0.82%.

On Monday and Tuesday, stocks rebounded off their nearly two-year lows, with the S&P 500 surging by 5.6%, its best two-day performance since the beginning of the pandemic and the third-best October opening since 1930. The unexpectedly positive economic data released during the week caused investors to hope that the Fed may halt or at least slow down its rate hikes aimed at controlling inflation. The Institute for Supply Management’s (ISM) metric of manufacturing activity fell to 50.9 in September; descending below 50 signals contraction. The reading fell short of consensus expectations and was also its lowest level since 2020. Inflation fears resurfaced after the OPEC+ group of oil exporters announced on Wednesday that they will cut 2 million barrels per day in their target production. This brought the benchmark price for a barrel of domestic oil up by USD 10 over the week. This is the first time since late August that the benchmark crossed the USD 90 level.

Signs of a strong labor market also boosted inflation fears, as the Labor Department reported an additional 263,000 jobs in September and the employment rate falling back to 3.5%, a multiyear low. Further bolstering concerns is a surprise drop in the participation rate to 62.3%, an indication that labor force competition for available workers will remain strong. The increase in wages appears to be slowing, however, as average hourly earnings continued to decline to 5% year-over-year from March’s 5.6% high.

In the meantime, the swings in interest-rate expectations and bond yields continue to drive market valuations and stock performance for this year. A brief easing in yields helped boost equities from their June lows, but some offshore developments appear to temper interest rate hike concerns. For one, Australia’s central bank slowed its pace of rate hikes, a surprise move that acted as the catalyst for a let-up of hawkish policies. Also material was the intervention by the Bank of England (BoE) pledging unlimited purchases of long-dated bonds to steady the markets. Such moves raised hopes that the Fed officials may become more aware of red flags signaling financial distress, and convince policymakers to become less aggressive in further financial tightening. That being said, it appears that a mild recession has a high chance of materializing in the first half of 2023.

For the past few weeks, analysts in the precious metals market have been warning that the sharp downtrend in metals prices through the summer may push gold and silver into oversold territory. The bearish market sentiment has been at its highest level in years, prompting the possibility that both precious metals were due for a rebound. Those forecasts paid off in the past week. Silver rose to a 12% gain at its peak as prices saw $21 an ounce. The gold market experienced a 4% rally we prices broke above $1,730 per ounce. Heading into the weekend, however, momentum began to slow as gold ended the week testing its support at $1,700 and silver clinging on to $20. The market’s performance over the week is an encouraging sign that bargain hunters are scouring opportunities. The rally may not be sustained, however, unless more bullish investors are inclined to begin buying for the long term.

The big news for the week in the oil market is the decision of OPEC+ to cut their production by 2 million barrels per day (bpd) during the group’s Vienna summit. This decision put to rest any speculation about the cohesion of the group, as it achieved exactly what the members wanted – higher oil prices. Concerns of a global economic slowdown have been set aside to oil market fundamentals and geopolitical uncertainty. The country that will spearhead the production cuts is Saudi Arabia, as Russia is already producing at its lower target. This move puts the U.S. on the road to higher prices at the pump, a development that compromises the Biden administration’s position only a few weeks before the midterm elections. Possibly in anticipation of this move, the U.S. Department of Energy (DOE) Office of Petroleum Reserve announced on September 19 a Notice of Sale of up to 10 million barrels of crude oil to be delivered from the Strategic Petroleum Reserve (SPR) in November 2022.  Meanwhile, the production cut by OPEC+ has prompted the Biden Administration to issue a threat to trigger anti-trust action against the oil group. Legal committees in both Congressional chambers had passed legislation giving the White House the power to take such legal action.

European shares firmed up this week following their global counterparts in the expectation that central banks will begin to pull back on their interest rate increases. The pan-European STOXX Europa 600 Index closed the week 0.98% higher in local currency terms. The major indices also regained some ground. France’s CAC 40 Index gained 1.82%, Germany’s DAX Index rose by 1.31%, and Italy’s FTSE MIB Index climbed 1.22%. The UK’s FTSE 100 Index added 1.41%. Germany’s 10-year government bond yields resumed their trek toward recent highs in reaction to the European Central Bank’s (ECB) September meeting. Minutes of the meeting indicated that the policymakers continue to worry about high inflation, which is likely to lead to another large rate hike in October. Yields trended upward in the eurozone. Climbing from the week’s lows were French, Spanish, and Italian sovereign bond yields after data indicated that eurozone inflation surged to 10% last month. In the UK, yields on 10-year gilts ascended after Fitch Ratings cut the UK’s outlook to negative following a similar action by Standard & Poor’s last week.

Japanese equities similarly rebounded this past week, following September’s poor performance that affected Asian markets in general. The first full week of trading in October saw Japan’s stock markets finishing solidly higher. The Nikkei average finished once more above the 27,000 level at 27,116 for a gain of 4.55%. The broader TOPIX rose above the 1,900 mark to end at 1,907, for a rise of 3.86% for the week. The optimism was fueled by sentiments that the U.S. Federal Reserve may assume a more dovish stance in its monetary policy. The largest single-day increase in Japanese shares occurred on Tuesday, going back to March 10. Investor confidence led a bargain-basement hunt for oversold heavyweights and growth stocks. Although the bourses performed remarkably for the week, it ended on a down note as stocks closed lower on Friday, cutting short a four-day winning streak. Hopes for a policy pivot by the Fed were curtailed with the release of solid private payrolls and services sector data from the U.S. on Thursday. Hawkish comments from the U.S. Fed officials on Friday further weighed on investor sentiments. The yen briefly rallied midweek to a high of JPY 143 against the U.S. dollar. Japan’s 10-year government bond dipped sharply by midweek to 0.210% but rallied late in the week to settle around 0.245%.

China’s stock markets were closed for the week in celebration of the National Day holiday from October 1 to October 7, known as Golden Week. In September, Beijing took steps to support its debt-laden property sector ahead of China’s Communist Party congress. This is scheduled to begin on October 16 and last for about one week. China’s President, Xi Jinping, is widely expected to secure an unprecedented third term at the twice-a-decade gathering. China’s foreign exchange reserves fell to USD 3.029 trillion at the end of September from USD 3.055 trillion at the end of August. This marked the third month of decline in China’s foreign exchange reserves.

Inflation, consumer confidence, and jobless claims are among the important economic data that are scheduled to be released in the coming week. 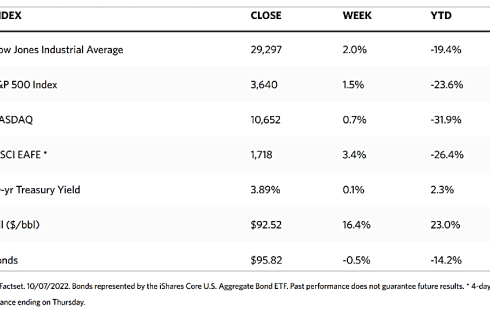