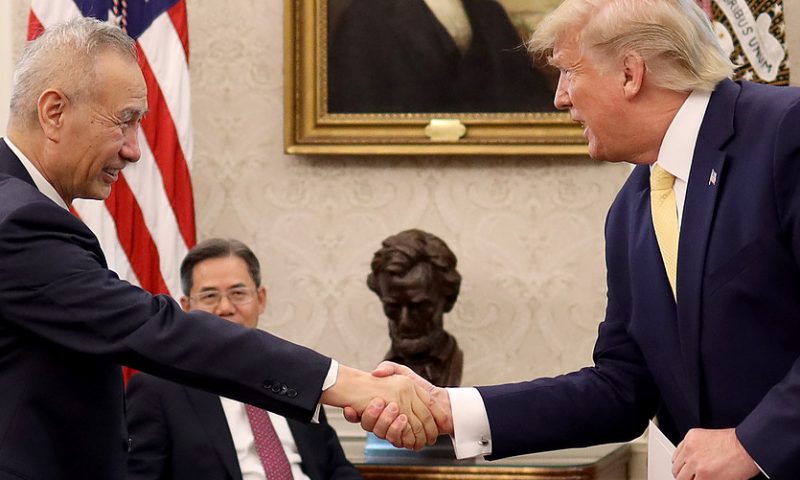 The U.S. and China have agreed to semiannual talks to push for reform in both nations and resolve disputes, reviving a format from previous administrations that Trump trade officials had once derided.

The effort will be headed by U.S. Treasury Secretary Steven Mnuchin and, probably, Chinese Vice Premier Liu He, said an administration official and others briefed on the effort.

It is set to be announced on Jan. 15 as part of the signing of a phase-one trade deal between the U.S. and China that includes Chinese purchases of American goods and some reforms to China’s economic system. The deal is the first full pause in the two-year trade war.

The new talks will be separate from negotiations over a second phase of the trade deal, which is expected to cover fundamental Chinese economic policies, including corporate subsidies and the activities of Chinese state-owned firms. President Trump recently said those negotiations may not be concluded until after the election.

The Mnuchin-Liu effort is aimed at discussing issues between the two nations and will represent a way for officials at all levels of the two governments to meet and develop deeper relationships. The trade talks, by contrast, have had a limited cast of participants from both governments.

The two sides are considering naming the process the Comprehensive Economic Dialogue. That’s the same name the administration used for failed talks in 2017 to get a quick trade deal in 100 days.

The president told Ross “to shut it down” and removed him from running China trade policy, as the U.S. girded for a long trade battle with China. Ross said some of the deals he negotiated back then will be part of a phase-one deal.

The new CED is closer in concept to what was called the Strategic Economic Dialogue, started in the George W. Bush administration by then-Treasury Secretary Hank Paulson. The SED was a massive annual effort involving many dozens of officials from both nations.

The Obama administration continued the dialogue but renamed it the Strategic and Economic Dialogue. Instead of focusing solely on economic issues, the S&ED looked at national security as well. From the U.S. side, it was headed by the Secretary of State and the Treasury secretary.

Trump trade officials, including White House strategist Steve Bannon, and trade adviser Peter Navarro dismissed the SED format as a talkathon that produced no concrete results. Early in the administration, Mr. Paulson met with Trump officials to encourage them to start their own version of SED, but he was turned down.

Myron Brilliant, the U.S. Chamber of Commerce’s executive vice president, praised the revival of the talks. “There needs to be a structured process to advance address serious issues with China so long as at the end of the day there is accountability, enforceability and concrete action undertaken.”

Aurora Cannabis now has a $1 price target from two analysts