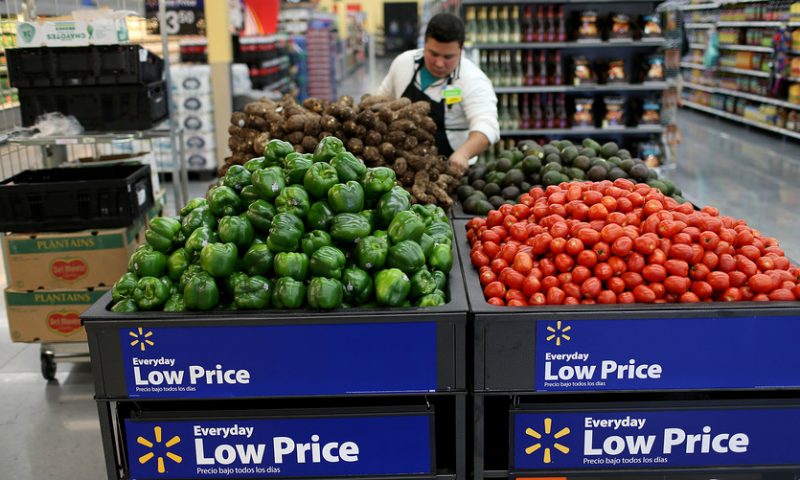 Walmart Inc. is expected to turn in fiscal third-quarter results that show the retail giant is snapping up market share when it reports on Nov. 14 before the opening bell, but Amazon.com Inc.’s elimination of its grocery delivery fee is turning up the heat on the competition between the two rivals.

The retail giant has also launched InHome Delivery in three cities, giving those customers the option of letting a delivery person put purchases directly into the refrigerator.

“We believe the Amazon Fresh decision in particular could cause Walmart to rethink its fee structure, particularly given its greater focus on conventional grocery and Walmart’s desire to win share in the emerging online grocery channel,” UBS said.

Amazon Fresh is offered in major areas that account for about 35% of the U.S. population, UBS notes.

“The investment case for Walmart shares is aided by the favorable consumer environment,” wrote John Zolidis, president of Quo Vadis Capital. “However, the core reason to be involved, in our opinion, is based on the company’s ability to create separation versus competitors via the combination of enhancements to physical stores and aggressive investment in digital assets and order fulfillment.”

UBS is also bullish about Walmart.

The FactSet consensus is for same-store sales growth of 3%, with 3.1% growth at Walmart U.S.

Walmart has an average overweight stock rating and average target price of $125.18, according to 30 analysts surveyed by FactSet.

Here’s what to watch for in Walmart earnings:

Estimize, which crowdsources estimates from sell-side and buy-side analyst, hedge-fund managers, executives, academics and others, expects per-share earnings of $1.12.

Estimize is forecasting revenue of $129.24 billion.

Walmart beat the FactSet revenue expectation last quarter, but missed the one prior to that.

-Walmart U.S. will be looking to John Furner, its new chief executive, to take the business to “new heights,” Cowen analysts say.

Walmart announced last month that its U.S. CEO, Greg Foran, would be stepping down to lead Air New Zealand, with Furner taking the vacated position on Nov. 1.

Cowen analysts credit Furner with turning around Sam’s Club, thanks in part to a focus store experience and tech tools for staff.

“We believe Mr. Furner will bring a similar mindset to Walmart U.S. and we anticipate a renewed focus on further bridging the physical and digital experiences through mobile innovation,” Cowen said. Among the innovations analysts think are possible: virtual testing for beauty products and the use of “smart” barcodes that provide product information when scanned.

-Walmart is growing its grocery business without raising prices, according to BMO Capital Markets.

“Our proprietary Custom-Cut Walmart Grocery Index continues to point to U.S. grocery market share gains,” analyst Kelly Bania wrote. “And while it appears that some retailers may be passing on more grocery pricing, our pricing study indicates that Walmart continued to invest in price.”

Walmart has widened the pricing gap with Kroger Co. KR, +0.15%   to about 10% from 7% to 9%, which is a “major advantage” in the price-transparent digital grocery retail space, BMO said.

Moreover, Bania is bullish on the grocery share gains that the Grocery Unlimited program and other initiatives will yield.