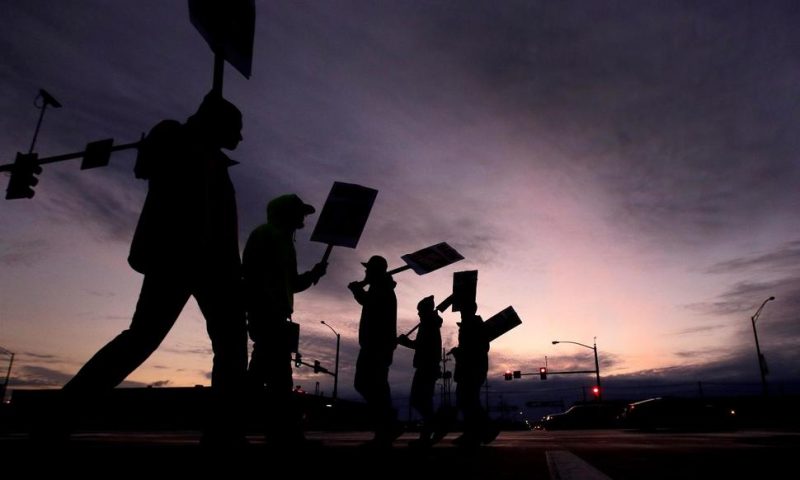 DETROIT — With the strike by factory workers against General Motors in its 29th day, there are signs that negotiators may be moving toward an agreement.

After both sides exchanged barbs late last week, bargainers met late into the night during the weekend, and they’ve returned in the morning, talking with few interruptions. All of those are signs that they’re progressing on key issues.

“The fact that they’re not name-calling anymore, at least for now, they’ve stayed a little later at least,” said Art Schwartz, a former GM negotiator who now runs a labor consulting business in Ann Arbor, Michigan.

Late Monday, the union summoned its General Motors Council, a group of factory-level union officials, to a meeting in Detroit on Thursday. This group normally would be brought together to approve an agreement, but both sides said talks continued Monday evening and no deal had been reached.

A letter calling the meeting says it’s for a “contract update and any other agenda items to be determined.”

Schwartz said convening the council usually means there’s a deal, but this year, union leaders seem to be giving more information to local leaders than in the past.

On Thursday GM accused the union of responding slowly to an offer it made early in the week and said that CEO Mary Barra urged it to speed up negotiations.

But Terry Dittes, the union’s top GM negotiator, accused the company of releasing “half-truths” that did nothing to reach a final agreement. The union raised strike pay by $25 per week to $275, starting this week.

Here’s where the talks stand as the strike by 49,000 workers that has paralyzed GM’s U.S. factories heads toward its second month:

The union and GM are still apart on the company’s commitment for new products at U.S. factories, with the union arguing that all vehicles sold in the U.S. should also be built in the U.S. GM has offered $9 billion worth of investments at U.S. factories, $7.7 billion from the company and another $1.3 billion from joint ventures, according to two people briefed on the talks. The $1.3 billion includes a battery cell factory in the area of Lordstown, Ohio, where GM wants to close an assembly plant, said the people, who didn’t want to be identified because the talks are confidential.

Wages and lump-sum payments also are areas of disagreement, with the union seeking hourly pay raises and the company wanting annual lump sum payments. A company offer last week gave workers 4% lump sums in the first and third years of the four-year contract, with 3% pay raises in the second and fourth years. This would be in addition to annual profit-sharing checks. This year workers got checks for $10,750 each. GM also offered to lift the $12,000 cap on profit-sharing checks.

Also at issue are the union’s drive for sweeter retirement benefits. Workers hired before 2007 get defined benefit pensions, while those hired after 2007 get 401K-style payments. The pension formula has not been increased for a dozen years.

After initially trying to cut health care costs, GM has agreed to keep benefits and payments the same as they are now. Union members pay 3% premiums while most workers at large companies in the U.S. pay over 30%, according to the Kaiser Family Foundation.

Both sides also have agreed on a path for temporary workers to get permanent jobs, the people said. GM proposed that they become permanent after three uninterrupted years of work, but that has been shortened, according to one of the people, who was not sure by how much.

On the pay issue, GM initially offered an $8,000 bonus to workers to sign the contract, but sweetened that to $9,000, the people said.

There is pressure on both sides to end the walkout. Most workers, who were hired before 2007, make about $30 per hour, or $1,200 per week, not including overtime pay. So for the four weeks of the strike, they’ve lost a minimum of $3,800 each. Strike pay has cost the union roughly $48 million so far, according to the Center for Automotive Research, an industry think tank.

GM, the center estimates, is losing $450 million every week, or $1.8 billion thus far. GM made more than $8 billion last year and has racked up more than $30 billion in profits in the past five years. The strike immediately silenced about 30 GM factories in the U.S. and has brought down two plants in Mexico and one in Canada. Parts companies that supply GM have had to lay off thousands of workers.

IF THERE’S AN AGREEMENT:

The strike would not end immediately. Bargainers would have to vote on a tentative agreement, followed by the union’s International Executive Board of officers and regional directors. Then the General Motors Council of factory-level leaders, including local presidents and bargaining chairmen, also vote. If they approve it, then this group would also decide if workers would put down picket signs and go back to work. It’s likely, though, that the workers would stay on strike until after all members vote on the contract. That voting could take a week or longer.