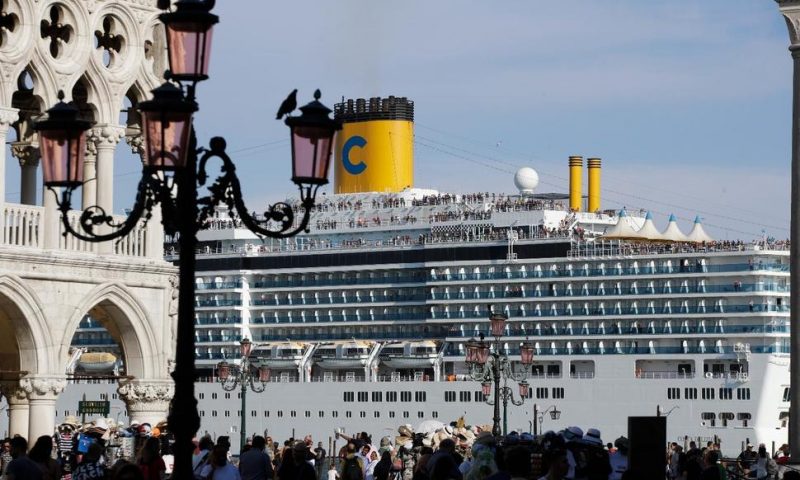 The 65,500-ton cruise ship that crashed into a much smaller riverboat docked along the canal on Sunday proved them wrong.

Italy’s transport minister ordered the head of the Venice port to Rome on Monday to discuss the accident, while Venice’s mayor called for rerouting the cruise ships from the heart of the fragile lagoon city, if not from the lagoon itself.

But environmental campaigners say the only legitimate response is an immediate ban on cruise ships from entering the lagoon. They allege that officials have dragged their feet on addressing the environmental and safety dangers of cruise liners in the seven years since the Costa Concordia capsized off the Tuscan coast, killing 32 passengers and crew members.

“All of these logistical issues count for nothing when you have the existential question of does the planet still want to have Venice or not,” said environmental scientist Jane da Mosto, executive director of We Are Here Venice, an activist group that opposes ship traffic in Venice.

The dramatic Venice collision injured five people. Video showed the MSC Opera cruise ship blaring its horn as it bore down on the riverboat and crashed into the cement embankment.

Four days earlier, a tour boat capsized on the Danube River in Budapest after colliding with a river cruise ship, leaving nine people dead and another 19 missing as of Monday.

The accidents have refocused attention on safety measures for cruise ships, especially when they are navigating waterways in cities like Venice, the Hungarian capital and others that draw large numbers of tourists.

Despite the debate that has raged in Venice over the regular passage of the behemoths, the historic city remains one of the world’s top ports of call for cruise ships, with twice the traffic of any other Adriatic port.

Last year, cruise ships traversed St. Mark’s basin and the adjacent Guidecca Canal 1,004 times, carrying 1.56 million passengers. That is down about 12 percent from seven years ago, both in terms of passenger numbers and passages.

Budapest Mayor Istvan Tarlos recently said ships like the Viking Sigyn, the river cruise ship that provoked the deadly accident, should not be allowed to moor in the city center.

Venice environmentalists have long complained that cruise ships displace water, wear down fragile foundations, cause air pollution and damage the delicate lagoon environment by dredging up the muddy bottom.

Silvio Testa, a long-time campaigner, said the lagoon environment is slowly morphing from its natural state into an extension of the sea, with a depth that stood at 40 centimeters (nearly 16 inches) a century ago worn down by all manner of sea traffic to 1½ meters (some 60 inches) now.

Many cruise ship opponents back a plan to put the terminal at an opening to the lagoon between the exterior Venice Lido island and the northern Cavallino promontory. The plan received official approval two years ago and never advanced for bureaucratic reasons, but would present cruise companies with the logistical issue of how to transfer passengers into Venice.

Venice Mayor Luigi Brugnaro, meanwhile, is backing a plan to move the terminal to the nearby industrial port of Marghera, where there is heavy oil tanker traffic.

Da Mosto said the Marghera solution has a fundamental issue, that the route is used by industrial and commercial traffic, and a government directive prohibits mixing passenger traffic with “potentially explosive industrial traffic.”

Ultimately, cruise line companies see the passage in front of St. Mark’s Square at the mouth of the Giudecca as a key attraction.

“It’s a paradox,” veteran activist Testa said. “Probably the fact is there is no solution. All of the solutions proposed are either unacceptable to the cruise companies and the operators who work around the port. Or they are unacceptable to those who want to protect the environment.”

The cause of Sunday’s accident has not been determined yet. Prosecutor Bruno Cherchi said investigators were looking to the MSC Opera’s black box to determine “if there is a technical reason that allowed the ship to go off course to the right. We must evaluate if we are talking about malfunction.”

Da Mosto questioned why the ship was not impounded by authorities after causing such a serious accident.

The Opera planned to resume its weeklong itinerary on Monday but was delayed for repairs to the hull. The MSC cruise company said it was unlikely to be ready to leave on Tuesday, and offered refunds to passengers who did not wish to spend the week on board in Venice.

Mike Driscoll, editor of the trade publication Cruise Week, does not believe either the Venice or the Budapest accidents will have a major impact on the global cruise industry, which fully recovered from the Costa disaster after an 18-month downturn.

Industry figures show cruise passenger numbers have increased 72% in Europe over the last 10 years, to nearly 7 million, and 68.5% globally to nearly 27 million.

“The sad truth is, things go bump in the night in the cruise industry, in the cargo industry, in any shipping industry,” said Driscoll, “We will see what happens, but in terms of meaningful impact on people taking a cruise, after Costa we were all sure this was really going to derail this business. And we were wrong.”